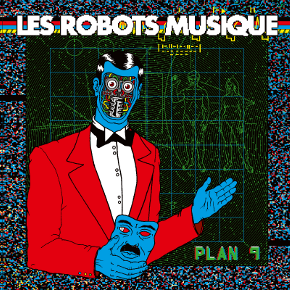 Coming from a far-away star aboard an interplanetary ship, Rod Droïd and Puyo Puyo were getting ready for a triumphant galactic tour in the heart of the imperial orchestra. Suddenly, their space engine exploded in midflight during a meteor shower. Propelled into the stratosphere, our two robot companions were thus projected to Earth, and more precisely, to Nantes, France. Assuming a human appearance, they immediately set to do the only things they knew how, music and concerts, in order to survive in this hostile environment thousands of light-years away from home. The Music Robots were born.
The duo is naturally reminiscent of Kriktoian folklore, only more offensive as far as rhythm goes. Their lyrics are simple (they are robots after all) and as light as the Hwagaagaa poems of their childhood. As for their sense of melody, it unmistakably evokes the engaging airs of Gamma Leonis and of Celestia, two stars famous for their happy tunes. Their pieces are short, efficient, and perfect for crazy, metallic choreographies.
A few months ago, Da! Heard it Records-always on the lookout for new talents-heard of this droidesque duo and decided to have them sign on its digital label. The robots, not knowing how to sign, simply waved their hands hello