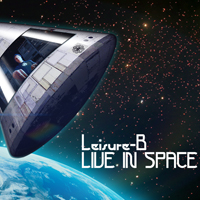 Since most people don't just like a certain song, but rather a particular version or cover of a composition, this leaves a wide gap for composers and producers of electronic music. With the Live In Space set up, Leisure tried to create a live environment in which new music can easily be imported and performed intuitively, while at the same time being able to create high quality recordings of the material on the fly. By cutting up the final version of the set in single tracks again, a wide arrange of versions can be created, depending on the mood of the controller and cooperation of other musicians during recording of each new performance.

Besides material from Leisure's solo project, the album also contains tracks from collaborations done over the years, including more recent projects like Polysure and Indikings, but also oldies by the likes B-Film, known from the NODE08 set.

Ninja by Leisure-B is licensed under a Attribution-Noncommercial-Share Alike 3.0 United States License.