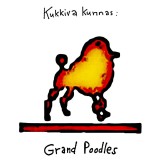 With the publication of this album and its companion Ordem Progresso [WM047] begins a completely new adventure in the history of mankind.

The Brothers Rumpan Löök & Kukkiva Kunnas announce themselves without miracle or mystery. It is easy for every charlatan to perform wonders, to bewilder and even to deceive not only fools but all persons, however shrewd, untrained in observation; nor does the trained observed always succeed instantly in detecting the fraud. Again, what Rumpan Löök and Kukkiva Kunnas propose to do is to enable such men as are capable of advancement to a higher interpretation of manhood to do so; and the proof of their ability lies in their success, and not in any other irrelevant phenomenon. Nor is there anything mysterious in Rumpan Löök & Kukkiva Kunnas; one must not confuse the mysterious with the unknown. Some of the contents of these albums may be difficult or impossible to understand at first, but only in the sense that Homer is unintelligible to a person ignorant of Greek. But the Brothers Rumpan Löök & Kukkiva Kunnas make no mystery; They give you not only the Text & Musick, but the Comment; not only the Comment, but the Dictionary, the Grammar, and the Alphabet. It is necessary to be thoroughly grounded in the language before you can appreciate their masterpieces; and if while totally ignorant of the former you despise the latter, you will forgive the more frivolous onlookers if their amusement matches your indignation. The Brothers Rumpan Löök & Kukkiva Kunnas have set their faces against all charlatanism, whether of miracle-mongering or obscurantism; and all those persons who have sought reputation or wealth by such means may expect ruthless exposure, whether of their vanity or their dishonesty; for by no gentler means can they be taught.

First publisheshed are two little albums; an account of Kukkiva Kunnas' character and purpose, restored from the vaults; these two albums chiefly for the benefit of those who will understand wrongly or not at all the motto "THE METHOD OF HOLY UNANIMOUS AMBIGUOS INSIGNIFICANCE --- THE AIM OF LAUGHING ZEN & PING FU KUNG," in which (if rightly interpreted) all is expressed.

From time to time new Musick will be published. It is the intention of the Brothers Rumpan Löök & Kukkiva Kunnas to establish a laboratory in which anyone may be able to carry out such experiments as require too much time and toil to suit with their ordinary life; and Their further plans will be explained fully as opportunity permits. Any person desirous of entering into the communication with Rumpan Löök & Kukkiva Kunnas may do so by addressing a letter to the Chancellor of the Order of H.U.A.I.

Eclogue by Kukkiva Kunnas is licensed under a Attribution-NonCommercial-ShareAlike 3.0 International License.