You came this way: Home > track brack records > Koonda Holaa > 10 Acres of the Finest Sa… > Knickers to the Right


Knickers to the Right by Koonda Holaa 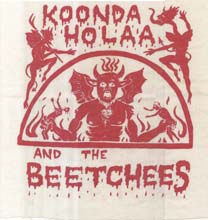 About Koonda Holaa: It's a brain child of Kamilsky, born in the late 60's in Teplice, Czech Republic in what would later be singled out as of one of the most polluted places in Europe.

He walked attached to a microphone, through his grandma's attic straight into a music school at the age of 5 to come out seven years later as an over trained folk singer.

In 1984 he went electric and worked his way thru local bands before landing a guitar/singer post in the F.P.B. in 1986, then and now one of the most original and infamous punk rock underground bands the Czech music scene produced in the 80’s.

Kamilsky landed in Munich in 1990 after two years imprisonment by the now expired communist government and started Pseudo Pseudo (drums and bass guitar duo) with Milan Novy as a drummer.

At the end of this chapter in September 1992, Milan Novy chose immigration to Canada as his priority and Kamilsky set his sights and assets on the United States.

There he opened his first Track Brack recording studio in Los Angeles- Echo Park location, played with Exene Cervenka of the 'X' and formed a larger orchestra to accompany him in San Francisco to record the second Pseudo Pseudo release "In Winter Go South".

In 1995 He was hired to play with the Residents for their 20 sold out shows in Prague which forced him to move back home where he also played bass and toured with Uz jsme doma, another band from his hometown to make a pass on to the world stage.

He was home only for two years before he in 1997 moved back to the States to recuperate at the church of JOE -his psychotropic spiritual advisor in Laguna Beach and before moving to Orlando, Fl. home to a freshly purchased Track Brack recording studio.

This is where "Cocky Cuties" came to fruition and Koonda Holaa and the Beetchees, which in its original incarnation included 7 or so musicians and helped, solidify the Orlando experimental scene became his new vehicle.

Next year he pairs up with drummer Randy Scarbery for some memorable touring in the States.

And in 1999 moved to Athens GA. Here he puts together an all Czech version of Koonda Holaa and for the next 16 months of relentless touring and shameless credit card debt, he met and collaborates with the new blood; projects with Radon collective, Steve Mackay, Hutch Hutchinson and Dave Catching at the Rancho, usaisamonster, bastard noise and amps for christ remain the most memorable ones.

The latest release "Sad and Sobbing Songs of Jameel abdul Kebab is a gem dug out in the San Bernardino mountains -new home of Track Brack recording studio. Almost entirely recorded off grid and assisted by Henry Barnes and his amazing collection of self made instruments.

Kamilsky no longer wears his electronics as his coat - it’s all a clean, crisp affair, but the humor and unusual sound remains constant in this album of mystical western balladering. The new band consists of Chante Brown from Philadelphia's heavy metal band Roullete and the French half of Sikhara, Yaan Geffraud. Live shows will be presented with projections of movies made with or by Kamilsky and other work from his favorite VJ's and directors.

» VIEW ALL“Knickers to the Right” Fans

Knickers to the Right by Koonda Holaa is licensed under a Attribution-NonCommercial 2.5 License.