An extensive anthology of traditional Japanese music was recorded -around 1941-42 by Kokusai Bunka Shinkô-kai: International Organization for the Promotion of Culture. KBS was established under the Ministries of Education and Foreign Affairs in 1934 for cultural exchange between Japan and foreign countries. KBS activities ranged from lectures, concerts, artistic and academic exchange, publishing books, photos, to producing films and records, establishing libraries and related cultural facilities abroad, among them this record set of traditional Japanese music.

As KBS' original purpose was to promote cultural exchange between Japan and foreign countries, it would truly be my pleasure if this revival of sounds heard 70 years ago once again brings to life the musical practices heard at that time. 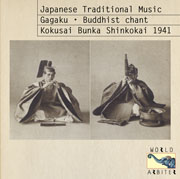