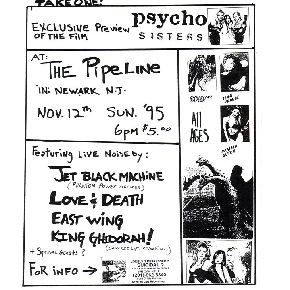 Release party for the shot on video horror film Psycho Sisters 1995 I think...I remember a desolate Pipeline gig round Halloween weekend.  We brought The Starlets but nobody came...well the Psycho Sisters came… KG was still pretty shaky on stage.  Not sure if there were two separate Pipeline gigs or just one…anyone? (cricket…cricket).  The Psycho Sisters 1996 shot on film remake soundtrack featured Severed Lips alumni The Gillmen, The Starlets, King Ghidorah! And Ultra Bide.  The Original Psycho Sisters 1995 Shot on Video version soundtrack featured Disco Missile and King Ghidorah! covered a Disco Missile song for the producer, recorded it for the re-make and played it (here) one time and never again. We abandoned the disco missile cover and recorded SHOCK MACHINE for the remake.  It was the longest song on the CD soundtrack released by Oglio Records and got the worst reviews on Amazon!  Psycho sisters is about two women who driven mad by witnessing the rape and murder of their little sister and go on a man snipping murder spree.  Available @ Alternativecinema.com

Ride Ride Out (live) by King Ghidorah! is licensed under a Attribution-NonCommercial-NoDerivatives (aka Music Sharing) 3.0 International License.
For more permissions:
contact artist