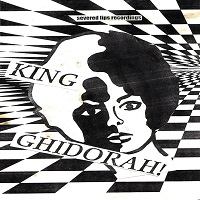 acid rock, big black, loud-rock, black flagg, progressive, blue cheer, birthday party, noise-rock, See Less...
» LOG IN TO TAG
CURATOR:
GENRES:
Length:00:48:57
Label:Severed Lips Recordings
Producer: William Hellfire
Engineer: William Hellfire
LONG PIG
Compilation of King Ghidorah! released and unreleased tracks. 1995-2000
Archetypes, demo's and oddities features on compilations or just played round the house to friends and foe, cat's and rats.
1. Tonka (instrumental) 4tk cassette recording.
Originally titled after the Italian Argento penned western 'today it's me tomorrow it's you' and a love letter to Ennio Morricone and Goblin exploitation film soundtracks. This instrumental was the last song the band wrote and recorded. Probably the bands favorite song. Also ended being the last song the band ever performed.
2. Autogol 4tk cassette version
Original DEMO recording, later recorded with Don Fury for Satanis Infinitum.
Something about 4 track recordings, the warmth, the muddled battle between frequency's occupying such a small space, the voices that appear out of the phasing...
the bass track is much more present than it's updated sub sonic counterpart.
3. Sleeping Sickness
4. Thief
Both 4 track recordings recorded for the 'Primateen Mist Kills Supermodels' SLR compilation tape release. Severed Lips Recordings 1996.
Sickness: A premonition, the true shape of things to come. A Don Fury produced version appeared on the 'Duck! the Carbine High Massacre' Soundtrack and seems to have foreshadowed the arrests of the co-director Joey Smack and William Hellfire. Inspired from the CULT OF RAGE TV slandering of the band MISSING FOUNDATION as well as the notion that crime leads to celebrity and celebrity leads to Mecca.
Thief: An early version of this song was an impove experiment recorded with pots, pans and a stretched canvas as a bass drum. The vocals were distorted and muffled so reviving the lyrics a year after its inception proved difficult. Mikey Ovum offered a brilliant interpretation. A song originally about robbing the cradle became a song about robbing the grave.
5. See Real Blood 4tk cassette recording
re-recorded for the kabala cassette release.
This version has an electric violin in the creepy opening. Severed Lips Recordings 1995
6. Decide 4tk cassette recording
Per request from the director of 'Psycho Sisters', King Ghidorah! recorded a cover of the Disco Missile song featured in the original Psycho Sisters (1995). We later recorded an original song 'Shock Machine' for the film's soundtrack. I don't think we ever played this live and as a band had little interest in it all together but in review, an interesting gem to include.
7. Shock Machine 24 track recording
From the PSYCHO SISTERS 1996 soundtrack released on OGLIO records.
My sister knew a guy who offered to record the band in his 24 track studio. Having been accepted onto this compilation soundtrack we thought it would be a great idea to have the track professionally recorded. The song was a 'busy' track to record with 4 track recorder and versions had always come up sounding muddled. when arriving at the studio we quickly realized that the engineers were only used to recording Hip Hop and R n B. They only had 1 X microphone. We opted to record live in the room with said stereo mic with a direct line out of the bass and the guitar live in the room. Then 2 X guitar overdubs and a vocal overdub. Little did we novice rock 'n' rollers know that Mikey Ovum's bass had ACTIVE pickups that were battery powered and the battery was dying. His bass sounds like a Cessna who's engine is cutting out, heading for a crash. Hellfire also broke a string during one of the over dub tracks. this was the worst rated track on the OGLIO release as far as the reviews went. A grand achievement for the band. Homage de BIG BLACK!
8. Tonka Reprise 4tk cassette recording
A reprise to the SWAN SONG of King Ghidorah!
This was a 'first take' to the last bit of the song that just didn't work out. added sentimental echo delay and a few tears.
Mickie Ovum - Bass on tracks 1,2,7,8
Tim Ryan - Bass on tracks 3,4,6
William Hellfire - Guitar, vocals, Violin, bass on track 5
Matt Icklan - drums
Compiled by Severed Lips Recordings 2008

Thief by King Ghidorah! is licensed under a Attribution-NonCommercial-NoDerivatives (aka Music Sharing) 3.0 International License.
For more permissions:
contact artist