I Disown You [All Singing] by Kathleen Martin 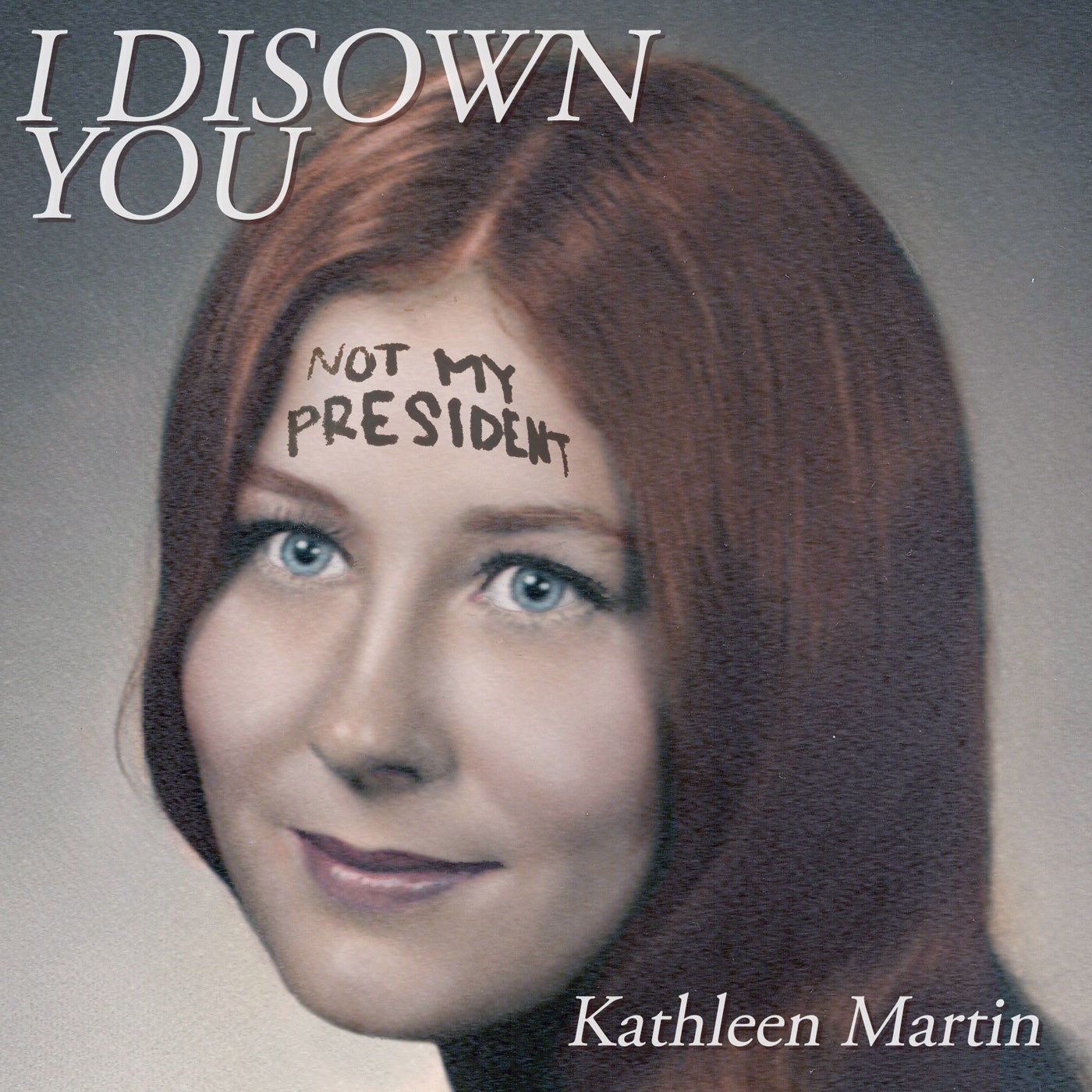 President's Day for US (2.20.17): Seemed most appropriate to post this freedom anthem on this particular bank holiday. My acoustic Guild is featured here in my performance of the '63 Madara & White melody, strumming aggressively through the piece twice, with one take from the R and the other from the L speaker. I also played some synth piano parts and the choral "Ahh" part on my Yamaha keyboard.

My title, by the way, is very much directed also to the toadies in Congress allowing our Democracy's checks and balances to bounce on a daily basis. These lyrics below aimed at 45 were posted in an earlier version at my Under a Bushel blog back in January. Given the pace of crazy antics from our part-time resident at 1600 Pennsylvania Ave, I could revise them with new additions weekly, but had to put down my red pencil finally to get this recorded. I may update them periodically at kat330.tumblr.com

JT's visual uses my high school senior class photo from the tail end of the same decade Lesley Gore's "You Don't Own Me" was released. Gore's grrrrl anthem had quite an impact as an early proclamation of female emancipation for me as a preteen, so please check out her performance somewhere on YouTube if you're unfamiliar with it. A few months after this senior photo was taken, I was marching in D.C. against the actions of another White House mad man and criminal, whose ultimate fate foreshadows that of 45's. What goes around comes around.  March on, good people of the planet!! xoxoxo

We're going to make you stop trying to turn back the clock;  Expose all your lies and such liars as your climate change deniers!

You litter with Twitter pollution!  You spit on our Constitution!  There's already ample reason to put you on trial for treason!

I disown you, along with your "so-called" presidency!  I disown you!  Impeachment will be such an "easy D"!

You can't build a tower to heaven, 'cuz your soul is in Chapter 11!  A Faustian bargain with Bannon, and Comey's your homey loose cannon!

I disown you! No need to change US, we're already great!  I disown you! You're a disgrace as our Head-of-State!

We're sick of your sycophants, and so tired of your toadies **Toting your huge ego baggage like glorified, overpaid roadies!

McConnell's your miserable Muppet, but the truth is you're Putin's puppet!  And trying to muzzle the media is like biting the hand that feeds ya!

I disown you, shamefully shilling sham product offers!  I disown you for famously filling your family coffers!

Among your "alternative facts" is "no one cares" about your taxes,  But you lost the vote by millions who wonder whither your "billion$"?!

In your bridge game to nowhere, you think that it's US the chump;  But the voting majority's well aware our best bid now's won "NO TRUMP"...

To be free from all your "bigly"otry, and US women free of misogyny,  And stopped before you even start grabbing control of our private parts!

I disown you!   (a mantra repeated as needed :)

** i.e., McConnell and Ryan and their clueless Congressional crews, plus Spicer and Conway and the "alternative facts" news

I Disown You [All Singing] by Kathleen Martin is licensed under a Attribution-Noncommercial-Share Alike 3.0 United States License.
For more permissions:
contact artist