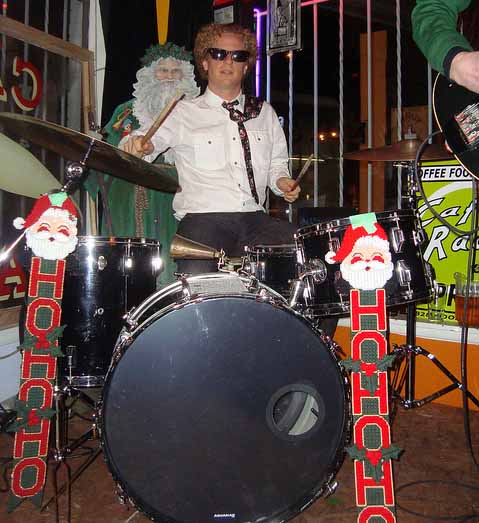 The Quit - Seattle’s own The Quit plays some great power pop tracks from their record “Stars Invisible By Day” live and direct from the KEXP studios.

Vetiver - The bluesy folk of SF singer/songwriter Andy Cabic and his band Vetiver fills the KEXP studio for this mellow live set.

Les Savy Fav - Brooklyn boys Les Savy Fav come correct with “Root For Ruin,” their 5th full-length record, which is full of great aggressive post-punk pop tunes. They play tracks from the release live at KEXP and during the last song Tim Harrington disassembles our track lighting with a power drill.

Strand of Oaks - Tim Showalter’s project Strand of Oaks is his outlet of electric loner-folk with obtuse/intimate lyrics topping a dreamy soundscape. He performs songs from “Pope Killdragon” live on KEXP from The Cutting Room Studios in NYC.

Frazey Ford - Vancouver, B.C. singer-songwriter Frazey Ford, one third of the Be Good Tanyas, now with her solo release "Obadiah" brings her old-school rhythm and blues-influenced folk to the KEXP studio for an intimate live set.

Guns For Radios - Seattle band Guns For Radios rock the KEXP studio with a fine set of garage rock featuring songs from their debut full-length "Losses and Gains."

Black Prairie - Portland progressive string quintet Black Prairie, consisting of 3/5ths of the Decemberists (Chris Funk, Nate Query, Jenny Conlee) along with the lustrous vocals and fiddle of Annalisa Tornfelt and deft picking of Jon Neufeld,  effortlessly blend sonic roots of bluegrass, folk and soul to a rich back-porch concoction at once soothingly familiar and unexpected.  Join them in the KEXP studio for this set featuring songs from their debut full-length "Feast Of The Hunter's Moon" recorded live on Audioasis.

Alash - Join KEXP for a unique live performance from Alash, a group of multi-instrumentalists/vocalists from Tuva (southern Siberia, Russia), who are masters of Tuvan throat singing and are bringing the ancient genre to a modern generation.

Millionyoung - Florida’s Mike Diaz aka Millionyoung and band stop by the station to play some of their dreamy and danceable electo-synth-pop from the debut LP “Replicants” live for KEXP listeners.

Stag - Enjoy a tasty bit of power-pop and some Christmas cheer from Seattle Band Stag with this set recorded live in the KEXP studio.

The Sonics - KEXP was honored to have reunited Northwest rock ‘n’ roll legends The Sonics stop by our studios for an awesome live performance that features both some new material and some of their classics as well.

Jus Moni - The young and talented local singer Jus Moni brings some R&B flavor to KEXP’s “Street Sounds” with a live set of tracks from her album “Ready For Life.” She’s joined by Parker Joe of S.O.T.A. on the track “Just Crazy.”

Legendary Oaks - Enjoy some great sepia-toned roots-rock from Seattle band Legendary Oaks as they play tracks from their self-titled debut live on KEXP.

John Grant - Former frontman of The Czars John Grant released his heartfelt and lyrically heavy solo record “Queen Of Denmark” with Texans Midlake as his backing band. He’s joined by a piano player in this somewhat stripped-down KEXP live set that features songs from the LP.

Shane Tutmarc - Singer-songwriter and Northwest expat (living in Nashville at the time of this recording) returns to Seattle for a visit and stops by KEXP to perform songs with his family band The Traveling Mercies. Includes some tracks from the EP “So Hard To Make An Easy Getaway.”

Fences - Seattle singer-songwriter Chris Mansfield and company once again stop by the KEXP studios for a live set of lovely downcast. Fences plays songs from the self-titled debut LP and a new track “Oh Father.”