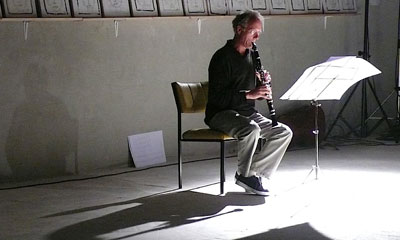 Jürg Frey was born in 1953 in Aarau, Switzerland. Following his musical education at the Concervatoire de Musique de Genève, he turned to a career as a clarinetist, but his activities as composer soon came to the foreground. Frey developed his own language as a composer and sound artist with the creation of wide, quiet sound spaces. His work is marked by an elementary non-extravagence of sound, a sensibilty for the qualities of the material, and precision of compositional approach. His compositions sometimes bypass instrumentation and duration altogether and touch on aspects of sound art. He has worked with compositional series, as well as with language and text. Some of these activities appear in small editions or as artist's books as individual items and small editions (Edition Howeg, Zurich; weiss kunstbewegung, Berlin; complice, Berlin). His music and recordings are published by Edition Wandelweiser.

Frey has been invited to workshops as visiting composer and for composer portraits at the Universität der Künste Berlin, the Universität Dortmund and several times at Northwestern University and CalArts. Some of the other places his work has developed are the concerts at the Kunstraum Düsseldorf, the Wandelweiser-in-Residence-Veranstaltungen in Vienna, the Ny music concerts in Boras (Sweden), the cooperation with Cologne pianist John McAlpine, the Bozzini Quartet (Montréal), QO-2 (Bruxelles), Die Maulwerker, incidental music, as well as the regular stays in Berlin (where during the last years many of his compositions were premiered).

Frey is a member of the Wandelweiser Komponisten Ensemble which has presented concerts for more than 15 years in Europe, North America and Japan. Frey also organizes the concert series moments musicaux aarau as a forum for contemporary music.