No Matter What They Say by Joe Meek 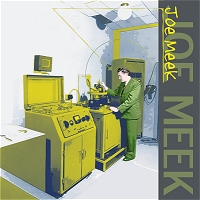 Joe Meek's story is that of a man who triumphed over obstacles. Whether these obstacles were the repressive, conformist record labels and studios of pre-Beatles Britain, or not being able to sing in key, read music, or play an instrument, the producer/songwriter's apparent motto was "never say never."

As these, er, remarkable songwriting demos show, Meek had a definite ear for a catchy tune. He could also create simple, clever turns of pop-song phrase. Unlike, say, Carole King or Burt Bacharach, Joe couldn't convey his songs in a clean, clear, easy-to-get manner.

He could wail like a banshee, bang on pots and pans, stomp the floorboards and turn up the reverb to 11. Meek did all this, and more, whenever he got the notion to create a new popular song for one of his recording acts.

Meek can be a winning vocalist, as evinced here by his bouncy-creepy demo of "He's All Mine." His was the talent of just missing the note, sometimes by a hair. What he lacked in accuracy, he made up for--in spades--in over-the-top vocal dramatics. At times, he sounds like a tent-revival preacher about to talk in tongues.

Given Meek's hair-trigger temper, and his increasing tendency to fly into rages, I don't imagine it was any Sunday picnic for Adams, Goddard, et al to be handed off a typical Joe Meek demo. Just getting at what Joe heard in his head, in the first place, would have been a challenge.

Meek was fond of singing along to totally inappropriate backing tracks to other records. Sometimes he'd slow them down, sometimes he'd play them Chipmunk-fast, jamming wrong chord sequences and phrasings over the pre-fab backgrounds he fished out of the chaos at his home studio.

Meek did work with Adams and Goddard, and you can hear him working with Adams on the song "As Time Goes By" here, apparently in a good mood and receptive to his partner's ideas. For every peaceful moment such as this, there may have been 20 Yosemite Sam-esque flipouts. Meek was an unpredictable soul, to say the least.

Though Meek's otherworldly wailings would've never seen release back in the day, to modern ears his vocal stylings are pretty amazing. There is passion in his singing, lots of passion--a hint of madness, a soupcon of pathos and an unmistakable pride and sense of humor.

To enjoy Joe Meek's demos does require a sense of humor, and an appreciation of the absurd. Out of these moans and groans came the likes of "Telstar," a global chart-topper that also made a pre-Beatles hit in the US. A producer of daring, innovation and sometimes surprising grace, Joe Meek the singer was a different beast entirely. To this Mr. Hyde of pop, I respectfully bow my head, tip my hat, and brace myself for the music we are all about to hear. - Frank M. Young