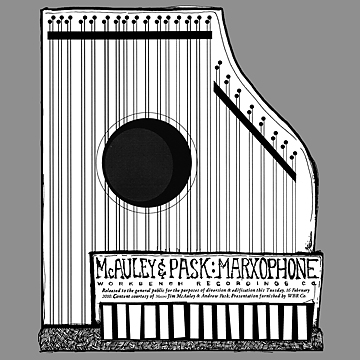 I first heard of Jim McAuley's work when I was looking over a new release list given to me by Scott Hreha, editor of the now defunct One Final Note webzine. The album on the list was Jim's Gongfarmer 18 on the Nine Winds label. One of the good things about writing reviews was those new-release lists. I was always looking to hear guitarists, and something in the promotional blurb led me to look Jim up online and sign up for the review assignment.

I was glad I did. I loved the album; still do. Unfortunately, the review was not one of my finest journalistic moments, but at least my enthusiasm for the album came through, and, it gave me a reason to talk to Jim over email. It wasn't long after that that I sent Jim a copy of Java St Bagatelles -- and his, and his late wife Nica's, enthusiasm for the album did a lot to bolster my confidence. We've been keeping tabs on each others' work since. And we've been discussing, since September, what we might release of his on Workbench.

A few months ago Jim mentioned that he was working with clarinet and saxophone player Andrew Pask and pointed me to his MySpace page. There was (and is) some great stuff there. I was particularly taken with "Rest of the Skeleton" which is a crazy combination of reeds and brass and squelching, burbling, scratching electronics. Andrew's stuff is really interesting.

So when Jim & Andrew presented me with this recording from a January gig at the Eagle Rock Arts Center in California I was doubly pleased.

Jim plays a marxophone on the recording (hence the title): a fretless zither instrument that's sort of like an autoharp. It's popularly known, if at all, for its use on The Doors' "Alabama Song (Whiskey Bar)". Jim also creates the real-time audio processing you hear via software Andrew wrote using the MaxMSP programming language. Andrew says, "the system is designed to have a slightly unpredictable output, one which is not known from the start of the piece, and in this way the software partly becomes a participant in the improvisation." Andrew plays the bass clarinet throughout.

"Marxophone" is a beautiful piece, and I'm delighted to be able to present it on Workbench Recordings. I hope you enjoy it as much as I do. -- James Beaudreau

Marxophone by Jim McAuley & Andrew Pask is licensed under a Attribution-Noncommercial-Share Alike 3.0 United States License.
So far 0 comments about this album. Add your 10 cents!