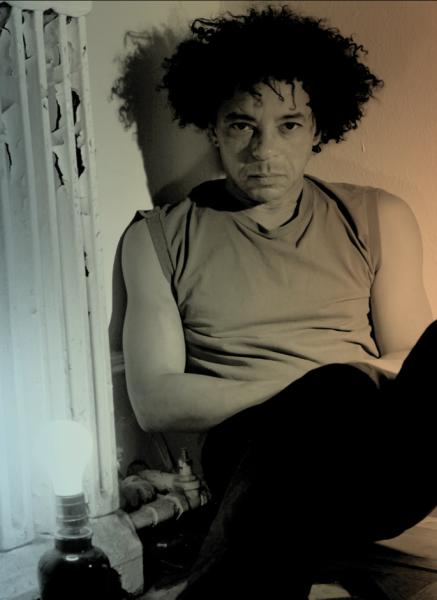 " “I started playing in bands when I was 13 years old, and that’s when I decided that music would be my life,” states Ivan Julian. “It’s always been important to me to be what I do, and not leave it behind at 5 o’clock.”

Although his new release The Naked Flame is his first album under his own name, Ivan Julian has been one of rock’s most celebrated players and most in-demand collaborators for more than three decades.  The album, Julian’s first collection of his own songs in more than 20 years, finds the veteran guitarist/singer/songwriter/producer effortlessly stepping back into the role of frontman/bandleader.  The Naked Flame features a dozen compelling new songs that benefit from Julian’s commanding performances as well as his seasoned studio skills, which give the tracks a timeless warmth and immediacy.

The Naked Flame draws upon Julian’s extensive musical background, while exploring some exciting new songwriting territory.  Such rousing original compositions as “The Waves,” “Hardwired” and “A Young Man’s Money” combine raw-nerved electricity with adult lyrical insight, while the bittersweet “You Is Dead” (partially inspired by Julian’s friend and former bandmate, the late Robert Quine) meditates upon loss with warmth and humor.  In addition to Julian’s own compositions, The Naked Flame features a pair of inspired cover tunes: a haunting reworking of Lucinda Williams’ “Broken Butterflies,” and a bracing reading of “The Beat,” originally recorded by Alejandro Escovedo’s old new wave outfit the Nuns.

“I look at this record as a harvest of everything that has come before,” Julian says.  “All of us are the sum of our experiences, and these songs are the product of mine.”

Indeed, Ivan Julian has spent his life soaking up a wealth of experiences, musical and otherwise.  The son of a Navy officer, he grew up in such exotic locales as Haiti and Cuba, nurturing a sensitive, creative streak that quickly manifested itself musically.  At the age of 13, while living in Washington, D.C., he became the singer in a Led Zeppelin cover band; the following year, he began playing guitar.  Having already studied bassoon and saxophone, Julian spent his high school years studying music theory as a part-time student in a college program.  At 19, his wanderlust led him to London, where he joined U.K. R&B hitmakers the Foundations, with whom he toured throughout Great Britain and Europe.

In 1977, Julian returned to the U.S. and settled in New York, just in time to become a key participant in the emerging punk rock movement.  He became a founding member of the seminal Richard Hell and the Voidoids, playing alongside trend-setting punk poet Hell, fabled guitarist Robert Quine and drummer Marc Bell (a.k.a. Marky Ramone).  Julian’s instrumental and songwriting contributions to the band’s classic album Blank Generation established him as one of the scene’s most acclaimed and influential axemen.

After the Voidoids disbanded in 1980, Julian stepped out front to form the Outsets as a vehicle for his own vocal and songwriting efforts.  Incorporating rock, funk and African rhythms, the Outsets became a beloved fixture on New York’s burgeoning club scene, winning considerable critical acclaim for such releases as the debut single “I’m Searchin’ for You”/”Fever,” a self-titled Garland Jeffreys-produced EP and the posthumously released The Punk/Funk Voodoo Collection.  Julian’s next band, the Lovelies, which teamed him with Bush Tetras singer Cynthia Sley, also won substantial local attention, releasing the acclaimed Mad Orphan in 1988.

By this point, Julian’s abilities as a sideman and collaborator had become sought after by a wide array of acts.  He recorded with the Clash (on their Sandinista album), Afrika Bambaataa, Tomas Donker of Defunkt and Bernie Worrell of Parliament/Funkadelic fame.  He also joined England’s Shriekback for two tours, and spent much of the 1990s touring with Matthew Sweet.

The Naked Flame’s birth cycle was set into motion by Julian’s rapport with the Spain-based Argentinian indie band Capsula, whose recent album Rising Mountains he mixed at his studio.  As admirers of Julian’s prior work, the members of Capsula urged him to record a new album and take his songs on the road, offering to serve as his backup combo on a proposed Spanish tour.  Julian was initially resistant, but he soon warmed to the idea and began a long-distance collaboration with the band.

“After they went back to Spain, I sent them some demos of my songs, which they re-recorded and sent back to me,” Julian explains.  “I thought, ‘Wow this is exciting; they get it.’  That began the process of me sending them songs via the web, and them sending back these amazing basic tracks for me to complete.  We continued trading, and eventually we put everything down on 24-track tape.”

Julian also called upon the talents of several old friends in the making of The Naked Flame, including his studio partner (and Heavy Trash/Speedball Baby member) Matt Verta-Ray, ex-Outsets/Feelies drummer Vinny DeNunzio, former Lovelies member Al Maddy and noted singer/guitarist Nicholas Tremulis.  In an effort to keep the recordings spontaneous, Julian had these musicians play unfamiliar instruments on the sessions.

“All the mixing and overdubbing was done between the hours of 9 p.m. and 8 a.m.,” Julian notes.  “I don’t usually prefer to work this way, but I had no choice, because the album had to be ready in time for the Spanish tour and my studio was booked during the day.  It wasn’t intentional, but working that way gave it a more personal feel, and I think that comes through in the music.”

As Julian’s first official solo album, The Naked Flame (on the indie 00:02:59 label) marks something of a career milestone.  But the artist prefers to view the new collection as part of a long-term body of work.

“Making this record was a great experience,” Julian asserts, “and I’m excited about getting the music out to people.  But producing, playing and singing are all the same to me.  If I’m not doing one of those things, I wither and die.  Luckily, I’ve been able to keep doing at least one of those things all along.  And now I get to do all three for a while.

“I’ve had my share of triumph and heartbreak,” he concludes.  “Everyone goes through that, no one escapes.  It’s all about how you ride it.  And I think that if you’re a musician, it’s your obligation to put the joy, the sorrow, the laughs and the tears into the writing and playing.  You have to take it all.  And one day you realize: this what I do and this is who I am.  That’s when the ride starts to make sense, and you just relax and do it.”

As The Naked Flame makes clear, after a lifetime of making music, Ivan Julian’s musical fire continues to burn as brightly as ever. " 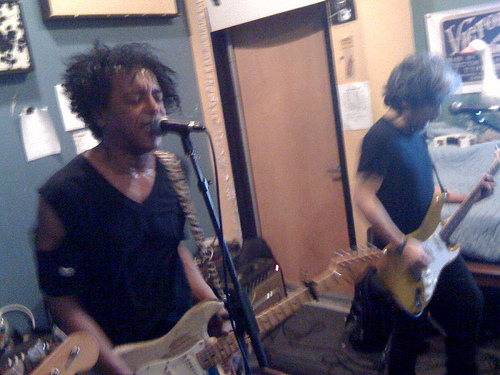 Live at WFMU on The Cherry Blossom Clinic With Terre T on August 13, 2011

Live at WFMU on The Cherry Blossom Clinic With Terre T on August 13, 2011