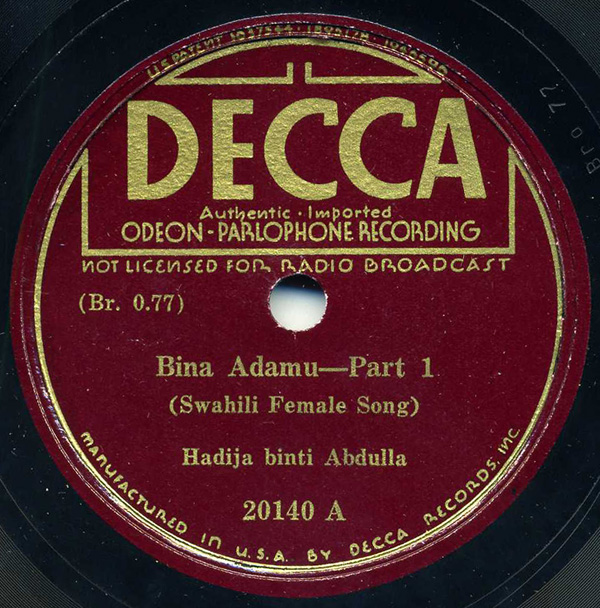 In previous posts, I’ve mentioned Robert Crumb’s volume of international 78rpm records titled Hot Women, which features female vocalists. On it, he included Part 2 of an exceptionally wild recording made somewhere in East Africa in the early 1930s. Today’s post is Part 1 of that fascinating record.

Decca Records in the United States began in 1934 (after truly beginning in England in 1929), and kept their maroon label for their international series. A large portion of the music released on that international series was from this hemisphere, but they did release some imported recordings, many of which were taken from German Odeon and Parlophone masters as the label indicates here. Most famously, American Decca found success in repressing Erich von Hornbostel’s influential “Music of the Orient” collection, which contained some recordings from as early as the ‘teens. You can still find a complete set if you’re patient. Much more difficult to track down, however, are examples from Decca’s African series.

Unfortunately, without a trip to a vault somewhere in Europe to dig through ancient paperwork (if it exists), and without a vintage catalog which might contain more information, there’s no way to tell where this record was precisely made. It could have been Kenya, it could have been Tanzania, Rwanda/Burundi, or Zanzibar. My best possible guess, considering the strong Arabic influence in the instrumentation (oud, violin, and percussion), is that it is taarab music from Tanzania or Zanzibar, but that is only a guess and nothing more. Or, might the two letter matrix code - BR - stand for Burundi/Rwanda? I’ve a very similar sounding 78 that is definitively from that particular region. But, who knows.

What I do know is that this vocalist will jolt you upright and rightly so. This is a one of a kind performance - just listen to her straining near the end of the piece.

For more vintage taarab music from the region, definitely check out the beautiful CD Poetry and Languid Charm on Topic.