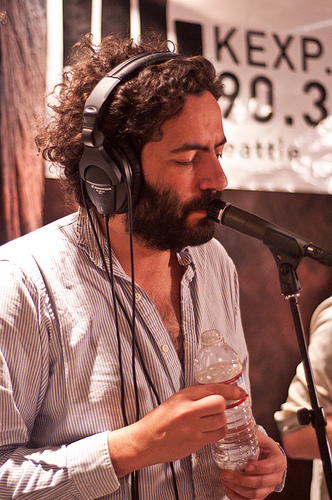 Cassie Ramone from the Vivian Girls and the Babies stops by KEXP for an exclusive live performance on KEXP’s punk show “Sonic Reducer.” She plays solo and acoustic and covers “Do Ya Wanna Dance.”

Columbus, OH’s Blueprint is versatile and dope both as an MC and as a beat maker. He moves away from samples on his LP “Adventures In Counter-Culture” and plays tracks from the release live on KEXP’s hip-hop show “Street Sounds.”

Montreal group The Dears bring big, vibrant rock sounds with orchestral arrangements and pop catchiness on their 5th album “Degeneration Street.” They stop by KEXP for an exclusive live performance that features tracks from the album.

Scottish folk singer-songwriter Alexi Murdoch returns to KEXP with full band in tow for a great live session that features songs from his record “Towards The Sun.”

Don’t miss this gorgeous acoustic set from French chamber folk pop group Revolver.  Featuring songs from their new EP "Parallel Lives," the golden and seamless vocal harmonies alone are sure to melt your heart.  Live on The Morning Show.

Ontario's PS I Love You stop by to rock The Midday Show on their way to SXSW, featuring songs from their new album "Meet Me At The Muster Station" -- Live on KEXP.

Ohio’s The Lighthouse and the Whaler brings their beautifully orchestrated, and folk-influenced indie-pop sounds to KEXP for a captivating live performance.

Enjoy the lovely and hazy dream-pop sounds of Virginia’s Wild Nothing with this live performance recorded exclusively for KEXP.

Long-running Seattle musician and member of The Riffbrokers and the South Sound Bureau Chiefs, Fred Speakman plays some of the fun and ferociously-guitared rock ‘n’ roll from his solo LP “Buck Up Bucko” live on KEXP.

French instrumental hip-hop producer Onra crafts beats that are silky smooth and whiplash crackin. He and synth player Buddy Sativa stop by Street Sounds for a live performance that features tracks from the album “Long Distance.”

Spanning generations, and brought together by a mutual love for old time southern folk music, legendary musician and film maker John Cohen teams up with The Dust Busters - a young traditional string band out of Brooklyn - to pay a visit to the Roadhouse for an amazing live performance, featuring songs from their new collaborative project “Prohibition is a Failure.”

Swedish group Väsen join Darek Mazzone in the studio with their progressive take on traditional Swedish folk for a live set on KEXP's Wo' pop.

Essex, UK electronic producer Gold Panda brings his shiny bag of beats and weathered samples  into the KEXP studio for a dope set of leftfield instrumental hip-hop and some more dancefloor friendly fare.

Brooklyn psych-folk-rock mad geniuses Akron/Family invade the KEXP studio with a barrage of tracks from their latest opus, "S/T II: The Cosmic Birth and Journey of Shinju TNT."

PDX lagomorphs Rabbits lay a heaving slab of rock on the KEXP studio floor - live on Seek and Destroy.

Baltimore Duo Wye Oak fill the KEXP studio with their textured and dynamic indie-rock for a stellar live set.

Southeast Engine out of Athens, Ohio bring their alternative country rock sound for set of tunes from their new album "Canary"  -- live on KEXP's Midday Show.

Puerto Rican garage-rockers Davila 666 punk the KEXP live room with a gritty batch of tunes from their latest, "Tan Bajo."

NYC band Yellow Ostrich, first started as a solo project of Alex Schaaf but now a trio, sends some sunny indie-pop your way live from the KEXP studio.