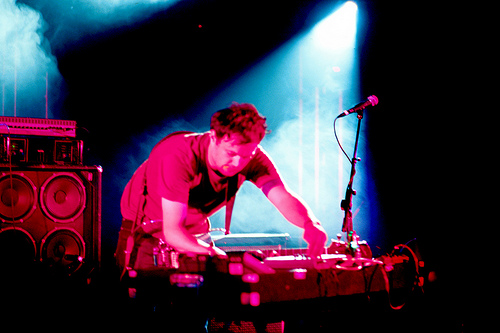 Now that we've exterminated the bedbugs, we're excited to share some auditory highlights from WFMU's All Tomorrow's Parties broadcast. The idyllic festival made its East Coast debut last month at Kutsher's Country Club in Monticello, NY. We'll be sharing auditory highlights in hi-fidelity stereo-sound (including portions that were logistically impossible to broadcast) on Beware Of The Blog and on the Free Music Archive pre-launch blog.

First up is Growing, a Brooklyn-based duo formed in Olympia, WA back in 2001. Like  many ATP groups, Joe Denardo (left) and Kevin Doria (right) took the stage strapped with guitars. But they ran them through a network of electronics to produce very un-rock-like sounds, navigating the controls on a trip through the outer rings. Doron cited Growing's set as his favorite of the festival in his ATP Recap (check out the slide show!), and he's not alone. If you like what you hear, The Social Registry just released their new full-length titled All The Way. It's Growing's third piece o' material for the ny-based label, and there's plenty more stuff to check out in Growing's vast discography (not to mention Doria's side project Total Life).