Handle with Care by GriefBirds 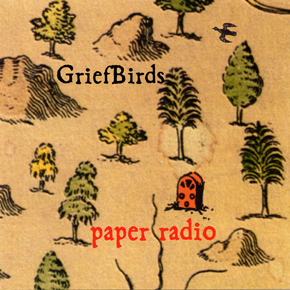 The GriefBirds are a songwriting project between seasoned veterans Coby Batty and Paul Watson that evolved into an actual group. The two had known each other for nearly 20 years before forming the GriefBirds, and both boast impressive resumés, having played with the likes of Sparklehorse, Orthotonics, Flaming Cicadas, the Fugs, Bongwater, and Patrick Phelan, to name just a few.

Perhaps less experimental than the other groups Batty and Watson have played with, the Griefbirds sound is friendly, pastoral acoustic pop occasionally augmented by such ephemera as Spanish guitar, cornet, clarinet, theremin, and '60s psychedelia. The gorgeously light, nostalgic sound is a red herring for the lyrics however, which tend toward the dark and pessimistic. (Example: "Put your hand in mine/and down to hell we will climb.") The group, whose name comes from a line in a Fugs song, released the album Paper Radio on Planetary Records in the fall of 2001. ~ Erik Hage, All Music Guide

Batty and Watson have been friends for 20 years, and in GriefBirds for almost three. The project, which Watson says was "a songwriting project that evolved into a real band," is unique for both. Their music styles have been known to follow several different routes artsy, satirical, folksy, experimental, ambient, and worldly. But with their new album, "Paper Radio," GriefBirds settle themselves into a friendly acoustic pop rhythm.

"The album is eclectic and coherent. Batty's folksiness and Watson's romantic sensibilities are well balanced, and the album offers a sweet and somber look at a world that might have been filmed on an old Super 8 camera." ~ Kate Bredimus, Richmond.com, 2001

Handle with Care by GriefBirds is licensed under a Attribution-Noncommercial-No Derivative Works 3.0 United States License.