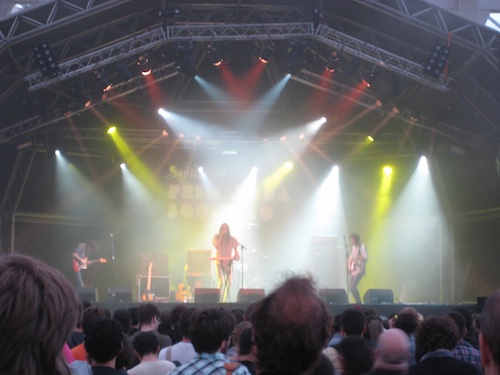 I've previously expressed my love for Sacramento, and have attempted to explain why so many great bands have risen from CA's capital, so I will restrain myself from repetition. I will say that it was amazing to stand in the midst of a crowd of a few thousand people at the Primavera Sound Festival in Barcelona last month to see a little Sacto fuzz pop band get some major love.

Ganglians are one of many bands who belong to the reverb-worship cult, but unlike many, they do not employ the effect to mask tonedeaf vocals. On the contrary, these fellahs actually harmonize.

Comparisons have already been made to the Beach Boys (for those vocal harmonies) and Animal Collective (layered euphoric pop with cheap keyboard effects). Ganglians manage to create honest, lo-fi psych-pop songs at an effortlessly loping and patient pace, a pace that can only be acheived by folks who are used to driving a lot over flat terrain on sunny days.

We'd like to apologize to drummer Alex's mom who missed WFMU's live broadcast of Ganglians' set due to some last minute schedule shuffling on our end (we found out that she missed it via WFMU's playlist comments and felt bad about it). Sorry Alex's mom! Listen to the whole set here.