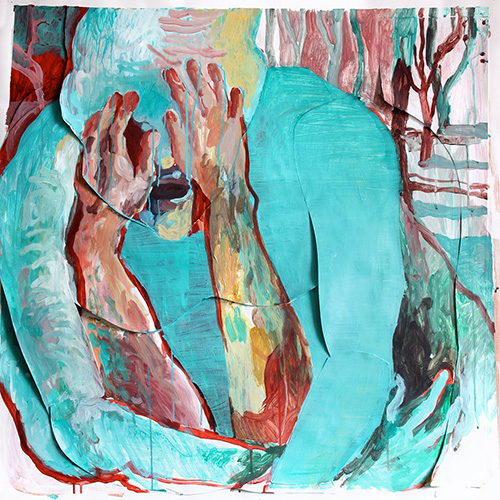 "This time FUSELab presents something quite different. A pack of really stunning tunes for Moscow-based producer Galun – and it’s all made by voice, believe it or not.

“Meltwith Myvoice” could be easily described as abstract beatbox or something like that but the things go really much further with the variety of sonic decisions Galun presents. Ambient, glo-fi, beats, boogie – whatever you may hear – the goal is it’s all naturally born with a man tongue, teeth and everything you my find in your mouth, if it was digital enough.
Galun aka Sergey Galunenko may be already known to you by his voiceover recordings with Monokle on their recent joint album “In Frame” released by 12rec, run by Sven Swift of Error Broadcast. But Galun’s musical history begins pretty far away in the past.

In the middle of 90s Sergey as many forward-looking guys wanted to create his own electronic sounds in the field of techno and other underground tendencies of that age. Though fast computers and good synthesizers were almost unavailable for the most of the young folks. So Galun started to experiment with his own voice, using it instead of everything – drums, synths, sequencers. He didn’t even know anything about common beatbox techniques and proceeded strictly by himself.

As a result Galun came a long way: played with a Russian band “Pakava It”, collaborated with “EU”, well-known for their IDM and electronica works and finally recorded his debut solo album “Boltun” (which means “Chatterbox”) – a mixture of abstract hip-hop, IDM, ambient, again whatever – Galun doesn’t like to talk about genres regardless the name of his album.

And there’s a serious reason for that – it’s really not easy to describe Galun’s sounding; in terms of the method – it’s kind of mixture of beatbox and semi-gospel vocalize; in terms of style – you can choose anything from funk, BOC-electronica, beats, ambient, again-and-again whatever. So it’s just if you try to sing your favourite Burial or Blue Daisy tunes in the shower. All in all the description really doesn’t matter if you just hear and it’s heard.

The sound on “Meltwith Myvoice” EP was produced by Ivan Kalashnikov, known for his participation in another russian band “Moremoney”, where Ivan is responsible for beats and electronic stuff and Galun for vocalize and beatbox.

Meltwith Myvoice by Galun is licensed under a Attribution-NonCommercial-NoDerivatives (aka Music Sharing) 3.0 International License.

Boomkat
So far 0 comments about this album. Add your 10 cents!