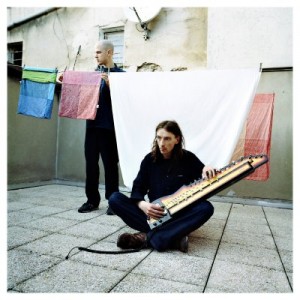 Michael Flower has been involved in a number of Solo Projects and is best know for his work with Vibracathedral Orchestra. The original group came together when Mick Flower began recording with Neil Campbell and Julian Bradley, who had released a number of homemade cassettes and an LP of their duo work. They self-released 2 CD-R albums before Campbell suggested merging the nascent group with the trio Flower was working with alongside Bridget Hayden and Adam Davenport, forming the best-known five-piece Vibracathedral Orchestra line-up.

The Four Aims LP/CD (VHF, 2009)
*Brainwashed – “There are few sounds so unique in improvised music today, and the duo’s perfection of this kind of head-on freedom is rarely matched in any circle….Building into a frenetic and undulating weight, the unit moves with a singular vision all too rare. Instant response is one thing, but Flower and Corsano can shift mood along with tempo, atmosphere with melody and approach with feel. This sort of elasticity and balance results in some of the most distinctly surprising and exciting sounds happening today.” – http://brainwashed.com/index.php?option=com_content&task=view&id=7454&Itemid=64

*Pitchfork – “Along the way they evoke Rudolph Grey’s far-out travels with Rashied Ali, Keiji Haino’s bursting solos in Fushitsusha, maybe even what Jimi Hendrix and Mitch Mitchell are playing in the after-life.” – http://pitchfork.com/reviews/tracks/11165-i-brute-force/

*Dusted – “The Radiant Mirror, the pair’s 2007 debut, is a blistering document, matching Corsano’s kitchen-sink percussion work with Flower’s electrifying Shahi Baaja (also known, in a bit of a misnomer, as an Indian banjo) in one of that year’s best records. The Four Aims finds the scope of the duo’s instrumentation widened, with more diverse results, but, at its core, this disc remains true to the pair’s original M.O., and with two musicians this gifted, it’s hard to imagine their collaborative work being anything less than outstanding.” – http://www.dustedmagazine.com/reviews/4887

*Tiny Mix Tapes – “In compositional breadth, in technical twinkle, in (a)tonal assault, this is a deeply humbling record, the inscrutable blueprint for progress.” – http://www.tinymixtapes.com/Flower-Corsano-Duo

*Foxy Digitalis – 9 out of 10 – http://www.digitalisindustries.com/foxyd/reviews.php?which=4195

*Bookmat – “Wailing psychedelic tangled droning and plucking is set against pounding unpredicatable percussion – it’s as if Hendrix picked up and left for India, bag of narcotics in tow and then bumped into Elvin Jones before recording a night-long improv session.” – http://www.boomkat.com/item.cfm?id=89435 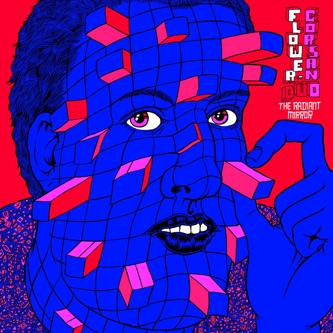