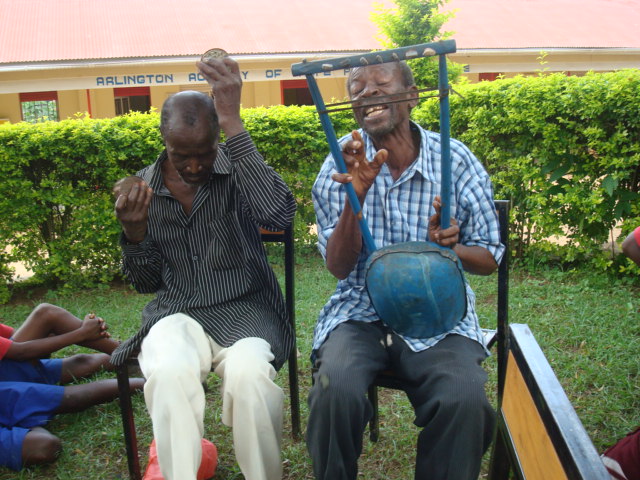 Field recordings done outside the Arlington Academy of Hope, a primary school deep in the Bududa Distric of Eastern Uganda, by Bruce Miller, Mid July 2015.

Last summer, my partner and I traveled to Uganda, partially so that she could assess the needs of a particular rural primary school, and partially so that we both might end up doing some traveling with a friend who was spending two years in the South West of the country as a Peace Corps volunteer. Of course, I had intentions of finding musicians, and since Eridat had a video on youtube, thanks to the folks at the Singing Wells project, and since I had put this video on my ipod, several teachers at the Primary School, including their music instructor, figured out that this man lived nearby. They went and got him and his percussionist, whose name I have missplaced for now, and they played the tracks available here for me. All I knew was that Eridat was awesome, and I wanted to hear him, or anyone like him. He and his partner, who had traveled to Malawi and Nigeria years previously, were honored and amazed I'd heard of them, and of course I was beside myself with joy at their appearance. Since we were at the school that day, they came and played there, which is why you can hear an audience, mostly made up of kids, on most tracks. This is fantastic stuff, and I'm happy to share it.

04 by Eridat Makwiri & percussionist is licensed under a Attribution-NonCommercial-NoDerivatives (aka Music Sharing) 3.0 International License.