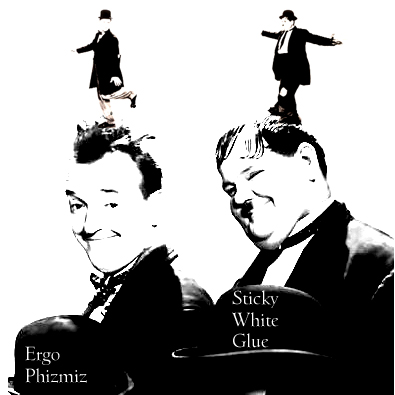 "Ergo Phizmiz's Sticky White Glue, a twelve-part series of sound montages--voices, music, and plunderphonic juxtapositions of the two--reminds us why radio has been described as "schizophonic," packing more disembodied sounds and voices than the ear can process" - Artforum magazine

This series "Sticky White Glue" first aired 2003-2004 on Resonance FM, London, and was repeated 2009 on Soundart Radio, Dartington. Segments of the pieces were also broadcast by Kenny G on WFMU. It is a fanciful play-around with the juxtapositions of instruments & voices with sampling and digital composition, and features as its main protagonists Stan Laurel & Oliver Hardy.

Retrospectively dedicated to Vicki Bennett, who kind of catalysed it

Also dedicated to MC Hammer, who grew like a courgette in the middle of it

and to Russ Abbot, a childhood hero, who banned his own "Atmosphere" single! Why why, Russ, why? Special mention should also be given to the glorious Bella Emberg

and to Laurel & Hardy

and, finally, to Kate, a lovely lass who had to live with this bloody music for nigh on two years