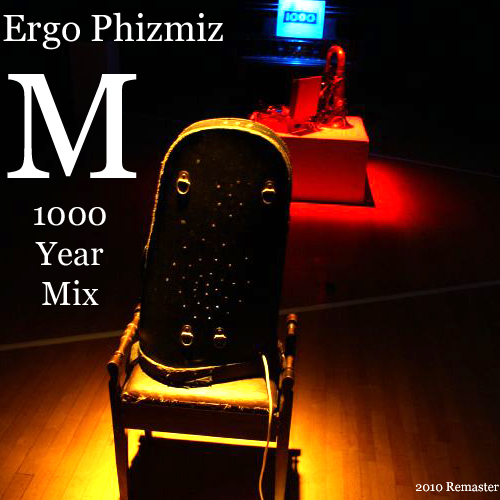 "M: 1000 Year Mix" was composed between 2005-2006. The only Ergo Phizmiz composition created entirely out of samples (excluding works like "Cinemacollages", which he doesn't consider his own compositions in the same way), the work is a hunt for dialogues between the music of diverse times and cultures, from 1000-2000 AD. Not a "mix" in the conventional understanding of the word, samples are treated as raw material to be spliced, reshaped and assimilated, creating new melodies and progressions from tiny fragments of this raw material, exploring the interior of how music works, and how music transforms across geography and the passing of time.

Part One is an exploration of Tonality and Atonality in music. Part Two is on the subject of Noise and Ambience. Part Three is a play with the developments of Technology and their relation to music. Part Four is about the usage of the human voice. Part five about Rhythm. Part six is the final amalgamation, or, if you like, the party at the end.

"M: 1000 Year Mix" is not a piece that professes to give any clear answers to any overriding questions about music. It is, like all of Ergo Phizmiz's works, "playing" music, or "playing with music", exploring with a wink and a cheeky, perhaps slightly lascivious grin the internal mechanisms of how music works.

Like the majority of Ergo Phizmiz's works, it was generally ignored by the mainstream media, though not for the want of press-releases and promos! However, as has become habitual the forward thinking magnificence that is the blogosphere came through, and amongst a myriad other bloggings across the web, the piece was described in this way:

"Imagine a playlist of music spanning a complete millenium, mashed-up and masterfully mixed together so that the listener slides backward and forward through time, almost like a non-linear evolutionary chart of the sonic experience.  Those who like a bit of experimentation in their music may find this composition as genius as I did.  Kerouac had his "On the Road," Michaelangelo had his "David," and Phizmiz has his "M: 1000."  Every artist has his masterpiece." - Jots From The Flipside, 2006

This was supposed to be the beginning of a projected long line of sample-driven works from Ergo. What happened instead was this piece wore out his capacity to create entirely sample based music, and he had no option but to return to other forms of composition.Remastered June 2010 by Ergo Phizmiz.