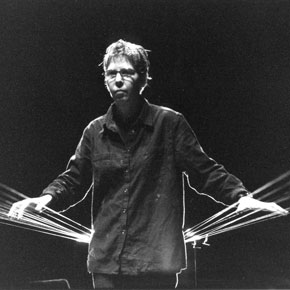 In 1981 Ellen Fullman began developing the “Long String Instrument,” an installation of dozens of wires fifty feet or more in length, tuned in Just Intonation and ‘bowed’ with rosin coated fingers. Fullman has developed a unique notation system to choreograph the performer’s movements, exploring sonic events that occur at specific nodal point locations along the string-length of the instrument. She has recorded extensively with this unusual instrument and has collaborated with such luminary figures as composer Pauline Oliveros, choreographer Deborah Hay, the Kronos Quartet, and Keiji Haino. She has been the recipient of numerous awards, commissions and residencies including: DAAD Artists-in-Berlin Program residency, Japan/U.S. Friendship Commission/NEA Fellowship for Japan, Meet the Composer, Reader's Digest Consortium Commission, Artist Trust/Washington State Arts Commission Fellowship, and artist-in-residence at Headlands Center for the Arts. Her music was represented in The American Century; Art and Culture, 1950-2000 at The Whitney Museum, and she has performed in venues and festivals in Europe, Japan, and the Americas including: Instal, Lincoln Center Out-of-Doors, Other Minds, the Walker Art Center and Donaueschinger Musiktage. Her release “Ort”, with Berlin-based collaborator Jörg Hiller, was selected in the top 50 recordings of 2004 by The Wire (London) and “Fluctuations” with trombonist Monique Buzzarté on Deep Listening was included in the Wire top 50 of 2008.