Out Of The Unknown by El Haijn 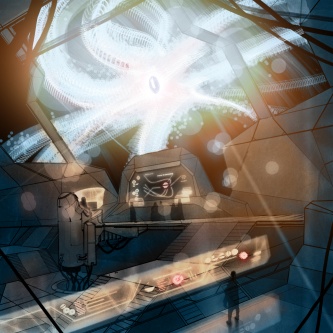 Most people try and stay indoors as much as possible.  The air is thick with every possible airborne allergen, on some days the visibility is so bad they won’t let you drive your car.

Outside my window it looks like a slow-motion sandstorm but I know I have to go into the office today.  It’s rare for the boss to request a face to face meeting unless it’s for some big punishment or reward, so I brace myself and open the medicine cabinet.

I pop two capsules of  a generic antihistamine and leave the house.  After 15 minutes everything turns into a dream, it feels like I’m swimming through the haze, the flakes of skin and bits of mold and pollen look like iridescent snow.  I can’t stop smiling! There’s barely anybody out, but the few people I pass seem to be in a similar giddy state.  My nose is running and my eyes are tearing.  I can’t even imagine how bad it would be if I hadn’t taken anything.

» VIEW ALL“Out Of The Unknown” Fans

Out Of The Unknown by El Haijn is licensed under a Attribution-NonCommercial-NoDerivatives (aka Music Sharing) 3.0 International License.