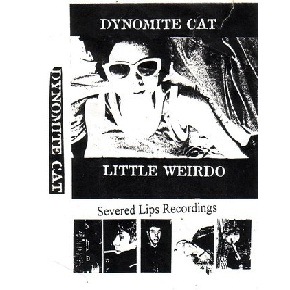 Side Project with members from King Ghidorah!, Mono Ovum and The Starlets.

Singer Ruby Honeycat was the house photog for SLR and played with William Hellfire in SLR side project Dynomite Cat.  The initial recordings via LSD fueled ‘pots n pan’ drums with guitar and vocal overdubs were never released and only played for friends around SLRHQ.  Ruby brought Mikey Ovum to Severed Lips which resulted in an outpour of recordings, experimentation and rock n roll.

With a love for Birthday Party, Jesus Lizard and Pussy Galore; Dynomite Cat pumped out a Cassette “Little Weirdo” two tracks for ‘Primateen Mist kills Supermodels” and  a track ‘Crawl’ for Psycho Sisters ’96 soundtrack, which was never used and only in 2011 showed up on ‘The Bughouse’ internet Mix (and now all studio tracks are here on FMA!). The song ‘code word machinegun’ was later used (instrumental) for the soundtrack of Duck! The Carbine High Massacre (1999).

‘code word machinegun’ appears  on the soundtrack of “Duck! The Carbine High Massacre” (1999).  DVD released by Shriek Show 2004 and on VHS by Factory 2000  in 1999. Available Amazon.com, Netflix and Alternativecinema.com

Track 9 from The Bughouse SLR internet only compilation 2011.

Pops Soda Shop by Dynomite Cat is licensed under a Attribution-NonCommercial-NoDerivatives (aka Music Sharing) 3.0 International License.