You came this way: Home > Dustdevil & Crow > ... and chiang tzu dreamed that he was me


... and chiang tzu dreamed that he was me by Dustdevil & Crow 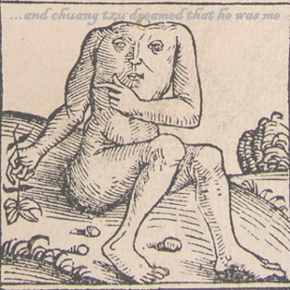 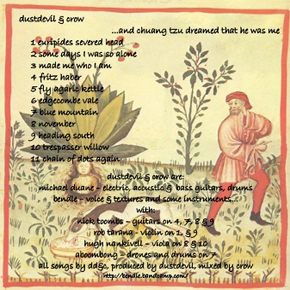 dustdevil& crow …and chuang tzu dreamed that he was me “I've always hated electric guitars! I've played one myself, so this is a thorny relationship, but in pop and "rock" music i often want to silence the guitarist, especially solos (I often feel the same about sax players in jazz!),” says Bendle, ex of late 1970s/early 1980s post-punk outfit The Door and the Window and now one-half of the electro-acoustic, noise-folk-industrial experiment known as dustdevil & crow. “ And here I am playing with a guitarist - who makes this amazing noise! I always feel honoured that such a brilliant musician wants to work on my songs!” That guitarist is Michael Duane, one-time leader of NYC No Wave mainstays The Dustdevils, erstwhile Wedding Present guitarist and, more recently, a collaborator with Railroad Jerk’s Steve Cerio (in psych-rocking Atlantic Drone) and Jackie-O Motherfucker. He and Bendle have been working together as Dustdevil& Crow since 2008, when they connected via a blog post Duane had made about The Door and the Window. Bendle contacted Duane to thank him and a musical conversation ensued, conducted, then as now, entirely over the internet. Bendle sent Duane some solo material, including a song meant for his next album. Duane replied, “I need to play bass on this!" and the partnership began. “Initially I'd build a bed of loops and sing a melody line over the top, and Michael would add stuff and then I would add more. Often I'd then remove some or all of my original loops,” Bendle explained. “Now the beginnings of songs come as often from Michael's end as from mine.” Working in this way, mostly by exchanging files, but occasionally touching base by phone, Bendle and Duane created three albums together, 2009’s while walking slowly you can see the grasses grow, 2010’s while speaking softly you can hear the insects sing and now …and chuang tzu dreamed that he was me. The album was named for the 4th century (BC) Taoist philosopher Chuang Tzu who, myth has it, once dreamed he was a butterfly and woke up wondering if he were a butterfly dreaming of being Chuang Tzu. A dreamlike sense of mystery pervades the title track and, indeed, the rest of the album, in elliptical poetic lyrics and a hazy intuition of alternate realities. Yet the songs are also fringed with rock aggression, rough-edged guitars, abrasive noise and, in two places, a drum beat reminiscent of Led Zeppelin’s “When the Levee Breaks.” There are clearly two very different sensibilities at work. The way they mesh with and contradict and reinforce each other is part of the fascination. Bendle said that he was occasionally surprised by what Duane had added to his compositions, but that the two worked from a foundation of trust. “Sometimes I can't even hear a connection between [what I’ve sent and what he’s written] when i first listen, but I have learned that it always works,” Bendle said. “After all, he's the musician in this band. I am maybe good at constructing music, but have limited capacities for properly playing anything... after many years of on/off performing and recording music I am still a non-musician.” He continued, “I’m also always amazed that Michael accepts my processing and sometimes mangling of what he does. For example ‘November’ began as a guitar duet from the same session, and having the same kind of sound as,’Fritz Haber’... and I turned it into something rather different! And even on “Fritz Haber’, i took the original guitar parts and cut and spliced them in a way that I felt worked for the song.” …and chuang tzu dreamed that he was me, as well as the two earlier dustdevil& crow albums, can be purchased via http://bendle.bandcamp.com For all other enquires, use the contact button at the bandcamp site above. 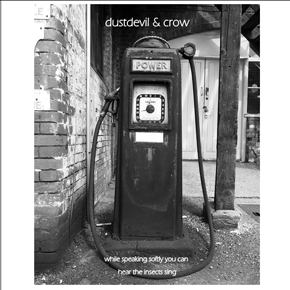 while speaking softly you can hear the insects sing 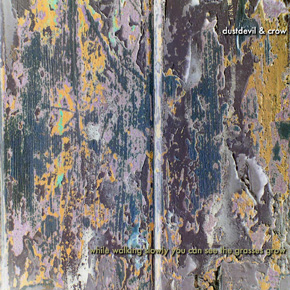 While Walking Slowly You Can See the Grasses Grow

... and chiang tzu dreamed that he was me

... and chiang tzu dreamed that he was me by Dustdevil & Crow is licensed under a Attribution-NonCommercial-NoDerivatives (aka Music Sharing) 3.0 International License.
For more permissions:
contact artist

bendle
So far 0 comments about this album. Add your 10 cents!