You came this way: Home > You Are Not Stealing Records > Dr. Phibes and The Ten Plagues of Egypt > Carmina Burana > Veris leta facies


Veris leta facies by Dr. Phibes and The Ten Plagues of Egypt 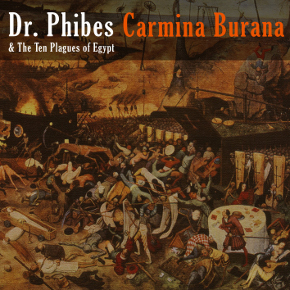 classical metal, portugal, you are not stealing records, dr phibes and the ten plagues of egypt, carl orff, See More...

About the Carmina Burana

Carmina Burana, Latin for "Songs from Beuern" (short for: Benediktbeuern), is the name given to a manuscript of 254 secular poems and dramatic texts from the 11th or 12th century, although some are from the 13th century. The pieces were written almost entirely in Medieval Latin; a few in Middle High German, and some with traces of Old French or Provençal. Many are macaronic, a mixture of Latin and German or French vernacular.

They were written by students and clergy when the Latin idiom was the lingua franca across Italy and western Europe for travelling scholars, universities and theologians. Most of the poems and songs appear to be the work of Goliards, clergy (mostly students) who set up and satirized the Church. The collection preserves the works of a number of poets, including Peter of Blois, Walter of Châtillon and an anonymous poet, referred to as the Archpoet.

The collection was found in 1803 in the Benedictine monastery of Benediktbeuern, Bavaria, and is now housed in the Bavarian State Library in Munich. Along with the Carmina Cantabrigiensia, the Carmina Burana is the most important collection of Goliard and vagabond songs.

Veris leta facies by Dr. Phibes and The Ten Plagues of Egypt is licensed under a Attribution-NonCommercial-NoDerivatives (aka Music Sharing) 3.0 International License.