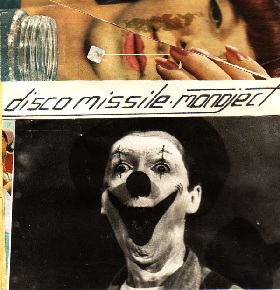 Beware enter at your own risk!

Monoject was the fourth installment from the wacky wavy world of Disco Missile.  After 3 extremely dissident incoherent recording sessions Disco Missile plotted and planned to reign in the out of control horses and construct a more tightly wound machine with MONOJECT. Eddie Blade’s side projects, mostly recorded and engineered solo, had a very tight coherent recording style and Disco Missile wanted to attempt reaching that level of clarity.  Giving Eddie the go-ahead to prepare more compression and exert more control over the production with a “hands off the buttons and nobs”  approach and “no turning your instrument up to 11 and stomping on any old box without FAA clearence”…was about the extent of the experiment.  Again L.S.D. was encouraged and gobbled.  Scotty came round to drop in some horn and baby sit if need be.  This session has some gleaming missile moments but each and every song goes on way to long and careens out of control multiple times before exhausting itself out.  The band seemed to record nonstop for the better part of a day, switching up instruments for inspiration, adding Eddie on Guitar, William and Todd both on bass at one point.  A few full on straight agro tunes along with the usual psychedelic romps plus some mellow naive jazz oriented trailing’s.  The band originally considered Monoject an important recording session (weren’t they all during a marijuana aided playback?) Polymer boy was used on the FREE “Pure Lure Dejour” Severed Lips Sampler Cassette and a few key tracks were rehearsed and played at live events (Rat Fucker, Polymer Boy and Viva la Shakes).  Shortly after Monoject was recorded the band finial hit its personal stride and recorded the Moon EP and Vinegar Eel, quickly surpassing the Monoject vibe altogether.   The Disco Missile always worked best in accident.  Monoject is for the curious, those who want to look into the window to a “headphone Hospital”.   Here and now this early Missile attempt at cohesion, this oddity is unearthed for your listening displeasure.  Headphones recommended but ill-advised.

Todd Vigorous – Bass and a vocal

William Hellfire – Guitar and some Bass, and a little vocal