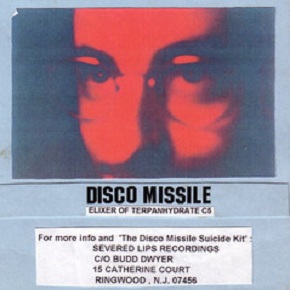 Elixir CV is a very uneven set of recordings; departure from and return to old ways. Back to basics; wild guitars and fuzzy vocals. New anti-techniques; overdubbing muddled dueling vocals and sample collaging over already ear shattering cluttered music.  The sometimes ‘wrongheaded’ direction the music was taking was a direct rebellion to the semi accessible pop music of the previous release ‘vinegar eel’.

Missile started experimenting with live percussion, switching the players around to have Todd on drums, Eddie on Keyboard, Bass and vocals, Hellfire still on guitar but intermittently adding a second vocal to the mix. Overdubs were used throughout the recording which was nearly a first for Disco Missile.  To keep the band fresh rather than rehearse old sets and solidify a “tight” live act, the band opted for a new set of noise improve and throwing fire crackers at its audience.  Car accidents and murder scenes played on a TV propped up on the bass amp.

The recoding process was broken into multiple sessions over a year’s span. The earlier sessions featuring the usual drum machine, the later the sessions recorded with live percussion.  If that awkward mix wasn’t jarring enough a novice Todd and Hellfire were left to mix down as Eddie was often M.I.A.

Eddie stole a bottle of ether from a collage science class.  At one particular basement show a rag soaked in it was passed along to all the kids before the band played.  The stuff smelled awful, the rag wasn’t in such good condition either.

Guns were becoming more and more fascinating.  How they were made, the weight in your hand, the kick when they fired…the splatter pattern they made on the wall behind a shattered skull.

Todd designed a Disco Missile T-shirt that had three aliens looking through a key hole at you and read FUCK OFF. WE KILL.  It would be the last image you would remember before they came to get you.  We no longer wanted to meet them, go in their space ship.  We feared them. Collectively.  As a band.  There was something awful going on.  Whitley knew it.  The recording was our version of an interstellar chuck wagon circling by like left to right speaker.  Bring her around.

4 The doctor. The ambulance.  and the police

"Call the doctor the ambulance and the police", that’s what was said after Bud Dwyer shot himself in the head on live TV.  Disco Missile played this particular video in slow motion at shows and it appears on Disco Missile's “MEET THE WRIST SLASHERS” VHS.

Headphones were feeding back in the microphone, it’s a mess, real muddy but we were scrounging for tracks and it was as noisey as the rest of ‘em.

This was used in the first Psycho Sisters movie, the shot on video 1995 version.  Even stranger, Ingor Laurie got us the gig!  She told us about the add in east coast rocker.

(These recordings were never intended to be recorded on earth)

Diesel by Disco Missile is licensed under a Attribution-NonCommercial-NoDerivatives (aka Music Sharing) 3.0 International License.
For more permissions:
contact artist