death for 5 computers by Dino Felipe 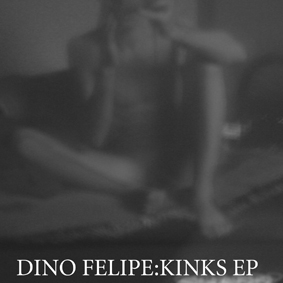 "dino's 'kinks' EP is a compile of 8 songs; music from 2003-2007.
the EP starts with a tribute to carlos gesualdo, a remix of werner herzog's documentary "death for five voices". the songs range from rhythmic songs, to ambient songs, and a mix of both. one song dino uses his voice as he has been doing more often lately. the EP ends with what maryanne amacher calls "3rd ear music", as a tribute he decided to attempt to make this sine wav related 3rd ear music,and it kind of worked.. when you listen to this song remember: this does not damage your ears, its making music in your ears! a great trick coined by maryanne amacher....."

dino felipe began playing with music since the age of six. (he still has those tapes!). he slowly evolved from making "rock" music,to what now people call "noise" music in 1996 with his bands: FKTRN, Hair & Nails, Old Bombs, all being released on limited cassettes at the time. then one day his four track broke and was forced into buying a computer (which he was highly against at the time)... put this all in a blender and look what happened!

death for 5 computers by Dino Felipe is licensed under a Attribution-NonCommercial-NoDerivatives (aka Music Sharing) 3.0 International License.