You came this way: Home > Dark Meat > TEAL CLODS FROM TIM'S HOU… > Thems That Die (Will Be The Lucky Ones)


Thems That Die (Will Be The Lucky Ones) by Dark Meat 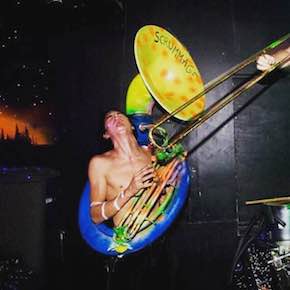 Some home-recorded Dark Meat tracks of varying ages, newly glommed into a listenable structure. Recorded in various whoever-was-around-that-day lineups onto cassette 4-track, mostly, but some 8-track, too; Tim is a genius with the 4-track, and he'd developed, I guess, extended techniques, where he'd bounce mixes between 4-track machines and fuck with tape-speed and EQ and the natural sound degradation that occurs to make things SUPER psychedelic -- which is, of course, WHERE WE WERE AT.

A few of these tunes were released on a 7-inch, and a few were made available here-and-there, but for the most part these are unreleased tracks. We barely played some of them live, as they were written and recorded during our rapid decline and death.

Almost without fail, the material we made and recorded at Tim's house on Tibbets Street in .Athens, GA is my fave Dark Meat shit. In terms of our song-oriented material, that's where we were at our freest, weirdest, most acid-fried and experimental. And shakiest and funniest and most fucked-up too. But, hey, that beans-and-rice combo of fearlessly pushing it and pathetically caving-in was always our thing: musically, socially, financially, psychically. You best believe it was by design, too, Jack.

» VIEW ALL“Thems That Die (Will Be The Lucky Ones)” Fans

Thems That Die (Will Be The Lucky Ones) by Dark Meat is licensed under a Attribution-Noncommercial-Share Alike 3.0 United States License.
For more permissions:
contact artist