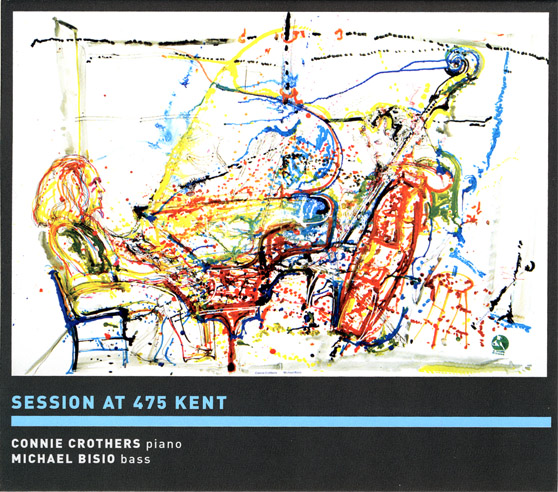 CONNIE CROTHERS is known for her wide range of expression, originality and her uncompromising spontaneous improvisation. MICHAEL BISIO invariably astounds audiences with the beauty of his tone and the intensity of his very personal musical language. Together they make an absolutely outstanding duo. The four improvised works on this recording radiate intensity and beauty.

"One paradox of the improvising musical art is that after the music is created, it is gone. The musicians don't really get to listen to it. We hear and create the music in an instant, then move on to the next instant. Michael and I had wanted to record just to hear the music. My loft is 1,000 square feet of open space. The concrete pillars and ceiling, the tile floor and the raised wood platform in the center of the space where the piano is all cause the resonance to be greatly enhanced (the platform is even a kind of vibrating soundboard). This room is ideal for recording. I set up informally. I only used two mics, but they are great ones--my Neumann U87s. I placed them, we gave it a test, then just played. And played and played. From the first second (in fact, from the soundcheck), we were in another place altogether. What is it? Some dimension of energy, sound, feeling, beauty--every note a surprise. Michael is amazing. When we listened back, we were two astonished and very happy musicians. I couldn't believe the recording sound. After all, I can't monitor when I am also playing. And the music. It's wonderful when you listen and are so drawn in by the music itself that you don't think, "I'm doing that." Although I could know that I'm the one on the piano and that it's Michael, with all his resounding non-stop individuality, there was a merge. It was just music itself, an intrinsic organism, just meant to be."

We at Mutable Music could not agree more: The music - it's wonderful.

Session at 475 Kent by Connie Crothers/Michael Bisio is licensed under a FMA-Limited: Download Only License.
So far 0 comments about this album. Add your 10 cents!