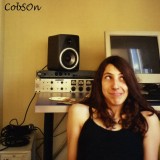 » LOG IN TO TAG
Released:August 14th, 2005
GENRES:
Length:00:22:53
Label:WM Recordings
When CobSOn was 6 years old, mom and dad Cobson sent her to the local music school (in the suburbs of Toulouse) where she started to play the piano. The course lasted 11 years. During the summer 2002, she wrote her first words, "give the slip" (now "kidding?"), which became her first song in october when she started playing the guitar. She met Thierry Bordier (drum teacher in the music school where she learned the piano) in december 2002 who invited her in his home studio. There were her first steps. Thierry, interested in her music, proposed her to come as often as she got new songs to record her. Their collaboration lasted 6 months, then he introduced her to one of his childhood friends: Rémi Caussé, arranger, who took her under his wing in november 2003. Next to this, "le mou'v" (radio) broadcasted "give the slip" in october 2003. Meanwhile, Cobson moved to Montpellier for her studies (foreign languages), which she stopped in january 2005 to devote herself to her music. Today Cobson keeps singing for Montevideo (since december 2004), a pop'n'roll band in Montpellier, which got contacts abroad, working on her songs at home and looking for people interested in her works.

Wasted? by Cobson is licensed under a Attribution-NonCommercial-ShareAlike 3.0 International License.
So far 0 comments about this album. Add your 10 cents!