You came this way: Home > Cathedral Of Chemical Equilibrium > Sonic Action and Regulati… > One


One by Cathedral Of Chemical Equilibrium 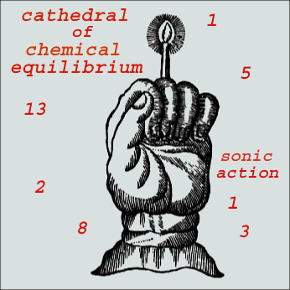 This score, composed by Lloyd Rodgers, is "rigorously organized around the Fibonacci series."

from the Bob Cole Conservatory of Music at California State University:

Lloyd Rodgers is a composer/performer/conductor, video installation artist and music director. He has been very active on a national and international level for over 30 years. He is an affiliate artist with the Orange County Center for Contemporary Art, and was director of the Cartesian Reunion Memorial Orchestra, a composer/performer collective that was active throughout Southern California from 1979 to 1992.

Since 1992, Rodgers has been directing his own ensemble. Recent works include The Black Book—a private music, The cathedral of chemical equilibrium, a large-scale installation involving two video projections, music, gambling, second- hand smoke, auto-voyeurism, 55 pornographic quotes, all of which is organized around the Fibonacci series; catastrophe of meaning, a multi-media theater piece including two video projections, electronic music, live music, and a go-go dancer; two electronic works commissioned by dancer/choreographer Karen Goodman, and a continuing collaboration with film maker/video artist, Ana Victoria Aenile.

Lloyd Rodgers has taught at UCLA, the University of Michigan, and is currently on the music faculty at California State University, Fullerton.

One by Cathedral Of Chemical Equilibrium is licensed under a Public Domain Mark 1.0 License.