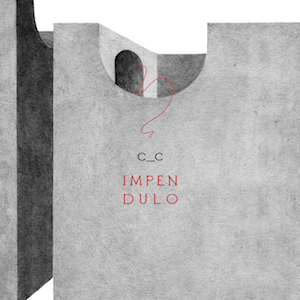 For its 34th release, Da ! Heard It Records is warming up the machines to trace some new paths.

Packaged in quasi-monochrome illustrations with quasi-absurd architectural tendencies, the visuals emphasize the kinetic art and foreshadow what one is about to hear: chain reactions and strange angles; it all moves and it all hits.

This cassette is an absolute beat garage!

Think of a little place where things are done by hand, geared towards total customization, fine-tuning; truly without concession and C_C is the boss. He’s the one with his nose under the hood and adjusting everything by ear. In total contrast with factory and chain-work

sound, C_C knows how to use a system as Low-Cost as Low-Fi. Not afraid of getting his hands dirty!

The electronic sound is played from the fingertips, and it’s audible: the patterns aren’t dull and the rhythms brilliant.

It also plays with codes, and plays with them in a laid-back way, arm hanging out the window, headlights fully on. It advances tirelessly, entertaining without using, definitely more auto-reverse than auto-stop. Natural born bottom-of-time, C_C plays it in four-wheel drive, for all terrains, and completely versatile in all respects. He alternates straight hitting lines, feedback turns, and reverb drifts, and allows himself to ride right in the middle, his kick as pressed as the pedal, larsen melodies comfortably settled in the backseat.

At full speed, it’s blinking from all sides, counterpoint at every corner. With always one ear on the rearview mirror, and the GPS evidently out of order… drifting away from the roots is inevitable. In Impendulo, one is thus neither here nor there, but rather on unknown territory with no markers, never safe, but always sound. Welcome to the fourth (rid)dimension, this four-track game that summons hormones and neurons, active listening, and active dancing.

The drum is electronic and its skin is unbreakable, and in a thousand miles, it will still be playing, unfettered. One hit up, one hit down, the rhythmics spar without any low hits and most importantly without the rotundity that fishing for sound can bring. With C_C, it’s refined and chiseled by ear on the mixing side. The composition is stripped of anything superfluous, reduced to the bones, and you feel it in your bones: trans, love it or leave it.

Impendulo, the 34th release of Da ! Heard It Records is distributed under a Creative Commons BY_NC_ND license. The album is fully listenable and downloadable at the following address:

ôl_lô by C_C is licensed under a Creative Commons Attribution-NonCommercial-NoDerivatives 4.0 License.