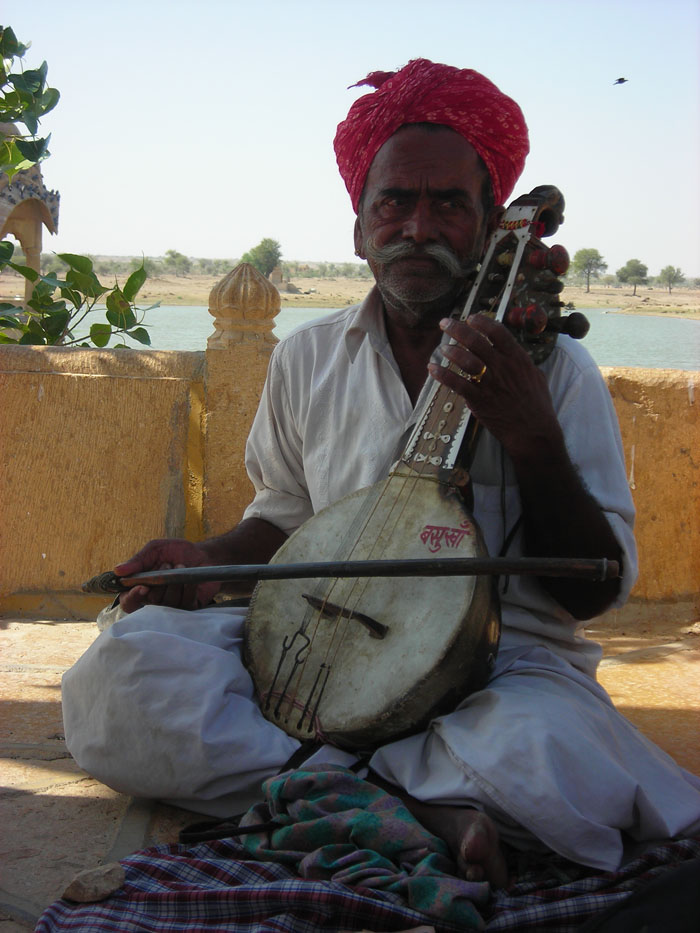 a collection of field recordings from India

The music here was recorded by myself between mid-Aug./mid-Oct. 2008 with a mini-disc player and a Sony multi-directional stereo mic. The areas covered are: Assame (mostly Guwahati) in the country's overlooked NE, Darjeeling, Varanassi and 4 places in Rajasthan (Udaipur, Jodphur, Pushkar and most importantly, Jaisalmer, in the region's western desert).

I'm not an ethno-musicologist, but have been fanatical about folk music from all over the world since I first heard a recording of Burundian drummers when I was about 17 ( I then got to see such a troup perform while living in Morocco in the late 90's). I've tried to snag a few examples of local music in many places I've traveled, but India was almost overwhelming, and performers were absolutely comfortable with an obvious tourist/foreigner waving a microphone, even when I was running down the street chasing after a parade band, as I did on tracks 21 (Pushkar) & parts of the collage I made on track 24 (Varanassi). It was always some god or other's birthday, or there was some other reason to celebrate, which meant music flowed through the streets. In Jaisalmer, there was a duo who sang and beat drums every morning at sunrise as they strolled the town. In Pushkar, horn and drum bands wandered through the less tourist-soaked sections and played songs for new-born babies (5, 28, 36). Temple bells and sanskrit chanting permeated Varanassi's ghats at dawn and again well after dark. Track 1 is a collage I made of sounds that happen every single morning at the Assi Ghat.Track 24 has some more examples of this as well.

In Darjeeling, Nepalese musicians played when it wasn't raining (it was still the tale end of Monsoon season when my girlfriend, Liz, and I were there), and there are a few examples here (2, 11, 43).  But to push things into any sort of perspective, it was a recording I snagged from a youtube video (48) that kicked this off. The clip showed two men, one on a hand drum and one on a dotora (a small, banjo-like instrument played by Prasanta Chandary on 5 tracks with his sister, whose name I've forgotten), and it was dropping this on an ipod and then playing it for an Engineering Professor/Assamese traditional music enthusiast at Guwahati's IIT, Arup Sarna, that led me to such sounds. He initially called together a Professional Assamese folk ensemble (heard on tracks 47, 49-53) to play a private concert for Liz and myself. I have video of them as well. Since Prasanta was in this band, the event naturally led to us visiting his home where the tunes with his sister were recorded. These are, as far as I know, incredibly old Assamese folk tunes, and they are easily the highlight of this entire set of recordings. Track 46 is from a cultural program put on at the IIT (other examples of this type of folk song have been recorded in the field by Rolf Killius, an ethnomusicologist who has documented lots of ethnic minority music all over India, including the remote North East regions, of which Assame is one. http://sounds.bl.uk/Browse.aspx?category=World-and-traditional-music&collection=Music-from-India&browseby=Browse+by+location&choice=Mizoram is a link to his collection)

Western Rajasthan proved to be the hotbed of easy to find street performance. But before Liz and I made it to Jaisalmer, we traveled all the way south to Udaipur. On the train I recorded the women on track 40, who had been traveling all the way from Calcutta to see their guru. In Udaipur we met street musician, busker and hustler Kishna, of the bhopa caste. He and his brother played ravannatah's, homemade bowed stringed instruments. Anyone who has ever been a western tourist in Rajasthan has no doubt been accosted by these folks, sawing away and aggressively attempting to sell off an instrument or jewelry. They're especially intense at the entrance to the Jaisalmer fort. Yet, when Liz and I met Kishna, we knew none of that. Here was the best ravannatah player we would ever hear (track 17, though I have several more examples of him). I spent a week hanging out with him, learning, and of course buying a Ravannatah.  As it turned out, his sister Santos and her husband, Hari worked the Jaisalmer fort, so we managed to avoid the tourist hustle and get invited to dinner at their place in Jaisalmer, where I recorded tracks 3, 27 and 35. Santos was a 35 year old grandmother and Hari had a giant trunk full of instruments he'd made for sale; these were uneducated victims of India's immense, impoverished lower caste system, so one can hardly blame them for hustling tourists. What would you do?

There are other gems: street drummers in Varanassi (track 44, which has a few seconds of a group of men laying bricks in Agra tacked onto the end of the track), the tabla & sitar duo recorded in a Varanassi music shop, the professional band heard on track 41 in a remote village outside of Udaipur as part of an all-night celebration, the locust near the border with Bangladesh heard on track 4 after Prasanta's 4-string banjo improv, various temples alll over the country, the Morchang (jaw harp) player in Jaisalmer who also worked as a puppeteer ( I have a few recordings of them also), etc.

Anyone with a recording device could have done much of what I did here; India gets pounded by tourists constantly and no doubt there is an ever-increasing amount of youtube footage of the very things I documented. I rarely bothered with names, which no good field researcher would ever do, but I had no plan other than to see what I could hear, and let that lead myself and Liz, who was awfully nice to go along with any whim my ears allowed, wherever it might. India is a spectacular, confounding, overwhelming, constantly morphing place. I suspect I'll go back and do this all over again.