Bright is a post-rock and ambient music group based in Brooklyn, New York.  Bright formed in Boston, Massachusetts in 1993 initially as a recording project, with Mark Dwinell (guitar, vocals) and Joe LaBrecque (drums) creating songs with minimal vocals, extensive Krautrock-influenced improvisation and repeating measures. Initial raw sessions were documented at the Albatross Guest House on a 4-track recording machine and were later overdubbed. A cassette tape culled from these recordings initially released on Eek records made its way into the hands of Ben Goldberg at Ba Da Bing! records. To fill out the group and facilitate live performance Bright brought more musicians into the fold – Jay Dubois (bass) and Paul LaBrecque (guitar, trumpet)

In 1997, The Albatross Guest House 4 track sessions was released and Bright reverted to a duo by the following year. During that time, the group recorded the mostly instrumental Blue Christian for Darla records Bliss Out series. Parting ways with Jay and Paul, Bright recorded Full Negative (or) Breaks in 1999.

At the close of 2001, Bright went on hiatus; Mark Dwinell recorded his solo debut NONLOC in 2002 (including various back-up by Torres) . In 2003, Bright began performing again sporadically, at times a six piece with all former members performing, and also picking up Nate Longcope before heading back to the studio in 2004 to record Bells Break Their Towers, released by Strange Attractors Audio House in 2005. 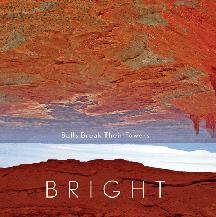