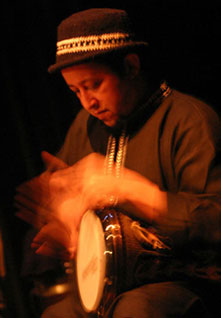 Brahim Frigbane is a talented Moroccan-born oud player and percussionist whose repertoire ranges from Berber folk songs to sub-Saharan influenced gnawa music to classical styles of the Middle East and North Africa. His collaborations reflect an even broader range of styles - he's recorded with Hassan Hakmoun, Sussan Deyhim, South African jazz player Pops Mohammed, DJ Logic, and even Morphine. And he was chosen as one of just a handful of local artists to be featured among the global luminaries at the Muslim Voices Festival of performing arts at BAM (the Brooklyn Academy of Music) and the Asia Society from June 5-14: He's playing a free show (along w/ zerobridge) on Friday June 12 at the BAM Cafe. You can also check out Brahim Frigbane over at Myspace -Rob Weisberg June 6, 2009 (WFMU Playlist & Streaming Archive)