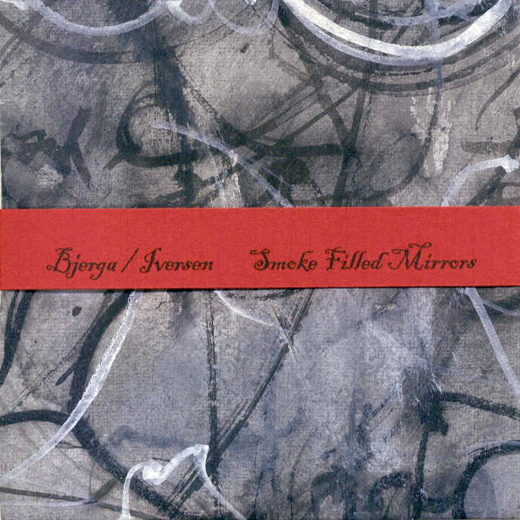 "The Norwegian duo of Sindre Bjerga and Jan Iversen has the kind of exploding nebula of a discography that makes one a little suspicious — you have to wonder if the pipes aren't being clogged with the busywork of a 100 fragmented CDr labels with more enthusiasm than good judgement. Luckily, this talented experimental duo constantly mutates their thing, as demonstrated on their justly lauded 'Lighthouse Tapes' series, and releases like this pair.

'Smoke-Filled Mirrors' forms part of the duo prolific 2005 work, being recorded and mixed in June least year as part of the 'Hovden Tapes' sessions. One could almost consider it an EP, since it is comprised of a single track eponymous of around 27 minute's duration. It starts will a cloud of electronics, oscillating drones, nether-shortwave voices and associated detritus conjure a dysfunctional machine-shop ambience. Odd, whirs, clanks, rattles and the sounds of broken machines inhabit the sound stage like the ghosts of impending failure that flow through the wires and fluid lines of a badly maintained third-world passenger airliner as the clock of its existence winds down. Warning lights go on and off, caution tones bleep but there is no one around to hear them but us, and we don't care. Signal waves roll onto tape in the black box of this grim industrial symphony, and eventually all the components begin to scream in unison and they figure out their number is up. There is power here, and a certain industrial revolution beauty, but no peace, and all of the possible resolutions obey the third law of thermodynamics. The machine dies, and its ghost moves on."

(review in Terrascope by Tony Dale)

Smoke Filled Mirror by Bjerga/Iversen is licensed under a Attribution-NonCommercial-ShareAlike 3.0 International License.
So far 0 comments about this album. Add your 10 cents!