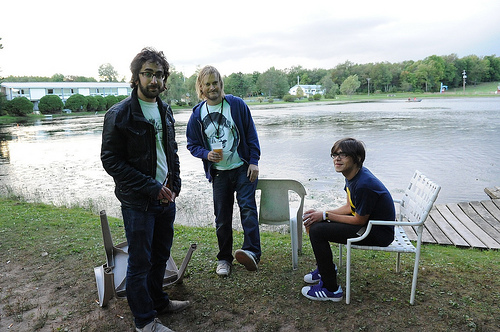 BEAK> were formed in January 2009 by three Bristol musicians, Billy Fuller, Matt Williams and Geoff Barrow. The band have very strict guidelines governing the recording and writing process of their work. The music was recorded live in one room with no overdubs or repair, only using edits to create arrangements. All tracks were written over a twelve-day session in SOA Studio’s, Bristol. The album is to be released on Invada records UK and Europe. Sometimes a band can be no more than the sum of it’s parts, but BEAK> are an equation in which it’s impossible to define equivalents or totals. Instead the meeting of three talent’s form a foundation from which idea’s assimilate and propagate. Those talents are: Billy Fuller. Reared in Bristol, on an aural diet of anything and everything, facilitated later by his time working in the cities top independent record shop Replay Records, and also playing with handfuls of bands – including Invada’s first signing: Fuzz Against Funk, as well as Massive Attack, Robert Plant, and Malakai. Billy is BEAK>’S thoughtful pulse; his bass a forceful origin for their superlative narrative arcs. Matt Williams. Picked up a Yamaha keyboard aged three and never looked back, as Team Brick creates dissonance that immediately elucidates free forming thought, and impacts heavily on BEAK>’S rolling landscape. He enjoys playing air drums whilst cycling, singing lines from a favourite Latin prayer and doesn’t understand the music he makes himself. Geoff Barrow. Musician and producer born near Bristol. Best known for forming and producing popular music group Portishead and part owner of the independent record label Invada Records . Commenting on working in BEAK> "its really good to create music under different conditions than your used too."