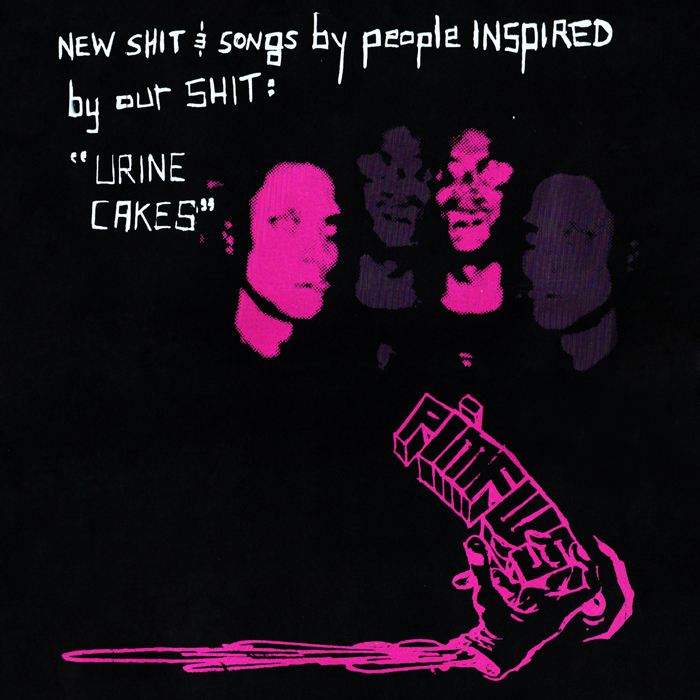 Original release notes: "By using the simple equation of invitation + imitation = invocation-to-putrification, we bring forth the flakey yellow mountain called 'Urine Cakes'. Its one half 'covers' of peeinmyfacewithsurgery and one half brand new original PIMFWS discharge. Urine Cakes cd-r is a dark and undead fantasy-for-a-laugh until the invitation requires a more specific and profitable open ended disaster. Listen up! It has nothing to do with the expectations implied by 'covers' in fact there seems to be absolutely nothing going on but alien despair harsh voice chocolate milk snot from shortwave radio field recordings and breakcore spit back within the humble abstraction of pure imitation. We ask you to come with us on our bad trip by becoming peeinmyfacewithsurgery for just one glimpse into the chunk of a wave returning to effervescent incongruity. Our invitation to imitation requires a nest of swollen carpenter ants popping in the sunshine and the appearance of moonshine expired. The huff-puff drinking dreary beginnings are running through an invocation of sound chunks placed in random orbit, in response to a dry wind; ever ample and justified in retaliation to imitation. Dropping on toes and ears like ten pounds of shit in a five pound bag!"

"I'm chuffed as hell to revisit this release after 6 years of moldering! So what follows is some special information about this lost turd-in-a-punchbowl. And remember it alternates between stuff made by our friends and bona fide PIMFWS.

This is a run down of invited guests and their expectorations:

Track 1 – Wayne McCann & Erick Mitsak “222” - Well guess what, i don't really even know who these dudes are and Jaime says, “I can't recall who Wayne is, maybe he's Erick's alter ego, but I met Erick in Melbourne, he's a weirdo movie actor and monologuer.” My guess is that these fuckers work for Mi5 & Mossad and somehow infiltrated our cd by drilling a head in Luca 8mm's skull while he was sleeping in order to insert the sounds onto the master tape.

Track 3 – Peema$ter “Prairie Song” - In normal life this guy is called Maddog and he's from Amarillo Texas. As a younger feller he was a competitive Pow Wow dancer, like he got all dressed up in Indian clothes that he made himself and did traditional dances. This earned him massive trophies with Geronimo standing on Custer's crushed cranium. During the final year that he lived in London, he dressed and lived all in yellow. His underpants were yellow, his bed was yellow, his apartment was yellow and all his stuff was yellow. He did this with red, blue, black and white, all for one year each. He called it The Color Path.

Track 5 – Asa Djinni (Tarek Atoui & Uriel Barthélmi) “Preem” - Jaime and I met Tarek in Marseille when he played on the same bill with Peeesseye. We were both totally amazed by his performance style and the complex boogie of his breakcore splatter. His long armed gangly dance made us jitter in anticipation. Preem is one shit hot remix with some serious conceptual continuity. The howling monkeys say it all! And I'm pretty sure he used some similar wildlife sounds that first time we saw him play.

Track 7 – John Seden “Shit Down My Neck With Therapy” -  This guy is Random Eyesore. We met in the late 80's. His television always made my headspin and he introduced me to the concept and practice of free improvisation. We always jammed when I visited him over the years and we called it Reel Speed Artist. On this track he takes the horizon apart with a screwdriver of psychik vision and puts back a creeping dada humpback. I imagine he's probably playing a TV, Drug Guitar, turntables and battery acid.

Track 9 – 2 Wick To You  “Magda Paper Bird Impression” - This is great artist Alex Baggaley who is well known for doing full moon walk/illustrations, homemade rubber stamp drawings and paintings of his absurd performances in the guise of Wandering Goon with stripy socks. He also makes videos and sound works and has been know to hold large groups of art fans hostage inside galleries and churches. This piece was recorded in HackneyWick East London and we were based in Bushwick Brooklyn which is possibly why he called it 2 Wick to You. It sounds like Telly Tubby acid revenge extrusions and makes me need a fag.

Track 11 – Naval Cassidy “Pea Surgery” - There is no radio signal safe from the transcendental wiggling of Naval Cassidy! In his normal life he is a prime practitioner of live video performance. In these situations he simultaneously manipulates small objects or props while capturing the activity on a series of miniature surveillance cameras then projecting the image overhead. These signals are switched by hand and by utilizing MaxMSP with soundtracks culled from fragments of his favorite records. He is a killer manipulator of sampled sound and shortwave radio broadcasts and sometimes wears a Batman yarmulke.

Track 12 – Crank Sturgeon & Peeesseye “Be Nice!” - This piece was originally credited as Cranky & PIMFWS but the truth of the matter is Chris Forsyth was present on this recording so its really Crank Sturgeon & Peeesseye. We recorded it when were on one of the final Peeesseye tours of the USSA. We had a fantastically fucked up gig at Strange Maine with Herr Sturgeon and Id M Theftable. We all (except Skot) stayed up late drinking whiskey and listening to Forsyth and Cranky twiddling Grateful Dead leads and woke up early to get back on the road. After breakfast we went to the seaside and recorded this ditty which by the way is one of the most significant songs ever written by Nerd Rock pioneers Three Day Stubble. The microcassette recorder was full of yogurt!

Pee In My Face With Surgery is Jaime Fennelly (electronics & voice) and Fritz Welch (voice & percussion). This material was recorded by Uptown Willis in the basement of S. S. Willoughby in Bushwick Brooklyn on September 11, 2007."