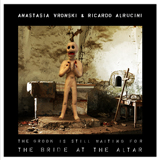 In this microcosm we catalyze the Sacred.  To the altar our liturgical actions coverge, that are in miniature the whole temple and the universe.  Not Christ crucified, redeeming our sins with blood but the sacralization of Christ, waiting for his Church.  Ascension in a progressive spiritualization, that renounce the sins of the others, is the aim for Universal fate.  A symbol for the end of the world, in the waiting of Christ for his Church, will be lost in a deep ocean of faith. A ritual dedicated to the scriptures, particularly the revelation that is based in mysterious realities that are going to happen, that is a prophecy and a vision in which all scenes are symbolic.

Ricardo Alrucini recorded the rhythmic parts, in Porto, Portugal, forming a ritualistic setting for the vocal part that was later recorded by Anastasia Vronski, in the Ural mountains, Russia.  The final mixing was done by gradually adding some missing parts, composing a classical, field-recording and noise piece, evolving from a classical beggining to a rumbling noisy end with the creepy presence of obscure environments from the field-recordings and sounds mixed by Ricardo Alrucini under the influence of Anastasia Vronski, who chose the lyrics from The Bible (opening of the 6 seal): "The opening of the first 6 seals" - Revelation of the Apostle John.

The Groom is Still Waiting for the Bride at the Altar (23:06)

The Groom is Still Waiting for the Bride at the Altar by Anastasia Vronski & Ricardo Alrucini is licensed under a Attribution-NonCommercial-NoDerivatives (aka Music Sharing) 3.0 International License.