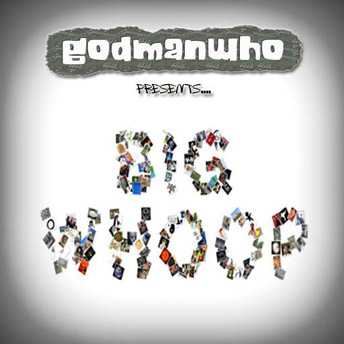 
Welcome to the world of godmanwho...

The sounds you may or may not now be hearing are from the first official godmanwho release called 'Big Whoop' (12 tracks of phatness!)

Act One, Lifeshows and Dan Darsh came together to make music and vibe off it.

Dig it, Peace and blessings

"...a rather fine slice of proper hip-hop which has hit just the right spot, (and) one of the more impressive British hip-hop albums to date.

...It's a half cerebral, half pleasantly amusing piece, not ashamed of delving into the sort of reflection and thoughtfulness which acts as a hallmark to most good alternative hip-hop, but also not so serious in its self-conception as to make for tedious navel-gazing... Download it."
Reviewed by The Creative Uncommons

"These guys kick out a top quality alternative hip hop sound which sways from fat, slow ambience from the trip hopping Massive Attack school to party flow rhymes straight from the late 90’s UK hip hop lexicon. The rhymes are well constructed, and delivered without shitty machismo and pretension, and it’s all dropped with a laid back feel that’s deceptively relaxing to listen to. Top album for the smokers amongst you..."
Reviewed by Needle In The Groove

08 BEATEN TRACK by godmanwho is licensed under a Attribution-Noncommercial-Share Alike 3.0 United States License.