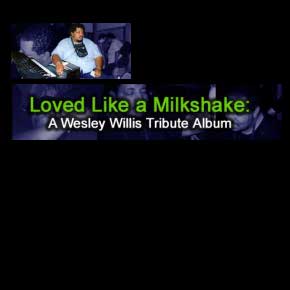 Wesley Willis (1963-2003) was an artist and musician from Chicago who released hundreds of songs with his own unique sense of humor. His chronic schizophrenia was reflected in his work which leaned toward the bizarre and obscene. Willis gained a cult following and major label attention.

One of his labels, the prominent independent Alternative Tentacles described Wesley's work as "simultaneously disturbing, hilarious, blunt, and intoxicating. Wesley's sheer excitement and unaffected honesty about every cultural phenomenon, defined his music as truly individual, and truly punk rock."

Sadly, in 2002 Wesley was diagnosed with Chronic Myelogenous Leukemia (CML). He underwent emergency surgery in June 2003, and passed away in August of the same year.

Hiji, a.k.a. M-Halo, soon thereafter organized a tribute album to honor Wesley Willis. Work for LOVED LIKE A MILKSHAKE: A WESLEY WILLIS TRIBUTE ALBUM began when Hiji posted a Craigslist listing suggesting a tribute of cover songs. The response was positive and the following 18 songs were selected. The final product was released for free online in November 2003 and produced by M-Halo with mastering and additional production by Tom Gordon.

Following is the original introduction by M-Halo.

It is with GREAT pleasure that I present to you this collection of Wesley Willis covers. For many, this has been a long trip completed within a short period of time. Each contributing artist was given the task of taking their Wesley track of choice and putting a whole new spin to it! The goal now (as it has always been) was to honor Wesley by showing the world that people from different musical backgrounds listen to his music and words.

I'm confident and proud in the work that each of the artists have done. Many were careful to mold their track just right as they wanted to do something that wouldn't disgrace the Wesley name. And it is my firm opinion, that each artist has succeeded in doing this.

"Thanks" deserve to go all around. First off, thanks to Wesley; he was one cool dude that broke new ground in rock n roll, punk, and music in general! Next, thanks to the heart and soul of this project: the artists; mad props go out to them because without them, there wouldn't be this tribute album. Then there's Tom Gordon and Loren Hill; Loren was essential in referring many of the bands, and Tom not only recorded quite a number of the contributors, but he also mastered the tracks. Of course, Dead Puppy Records can't be forgotten either: they were kind enough to host all the MP3 files! Finally, thanks go out to all the people who helped out in other ways: creating buddy icons, flyers, spreading the word, and more.

Now, sit back, click on an MP3, and enjoy the tunes!