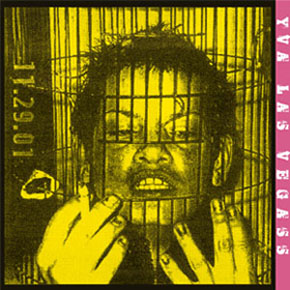 Yva picked up a guitar in the early 90s and headed out to busk in the streets of Seattle. Over the last twenty years she's gotten beat up for her music, been homeless and a drug addict, suffered heart attacks mid-set, had her teeth stolen, starred in a full-length documentary film and played all over the world and she still rages harder than ever. That said, I Was Born in a Place Of Sunshine and the Smell of Ripe Mangoes is no blast of harsh noise. It's an often-gorgeous collection of tender ballads, raucous cuatro workouts, soul-purging epics like Crack Whore and traditional Venezuelan work-songs, a raw and astonishing distillation of Yva's vast and varied life-experiences.

Born in 1963 in Puerto La Cruz, Venezuela to a musical, middle-class family, Yva earned a ticket to boarding school in the states as a result of teen rebelliousness—which suited her fine. “I'd just seen Porky's, so I really wanted to come to the US,” she laughs. After a series of educational mishaps (“No school would hold me,” she says), she ended up in Seattle and decided, with a friend, to try her hand at street performance. “We played for like five minutes and we had enough money to buy a Whopper,” she remembers. “We were so excited.” She was soon a staple around Seattle, and after a chance gig playing Krist Novoselic's birthday party the formerNirvana bass player invited her to jam. Impromptu sessions led to a proper band—Sweet 75, after a poem by Theodore Roethke—and, within months, a major-label record deal and opening slots for heavy-hitters like L7 and Dinosaur Jr.

For whatever reason (take your pick: lackluster marketing, musical differences, the vagaries of the music industry, a listening public not ready for a queer woman of color who was also an unrepentant badass motherfucker) Sweet 75's debut album failed to find much success and the band fizzled out in the late 90s. The intervening years have found Yva Las Vegass living, loving and singing her heart out, honing her craft to razor-sharp precision.

There's not much catering to the English-speaker on this album, the bulk of which is sung in Spanish, just as there's not much excuse for a 21st century American not to speak at least conversational Spanish. But the blood and sweat that are all over this record don't really need translation, either. Guaranteed, no one on this earth sounds like her.

Mariposas by Yva Las Vegass is licensed under a Attribution-NonCommercial-NoDerivatives (aka Music Sharing) 3.0 International License.