Got A Hand (Dynomite Cat) by William Hellfire 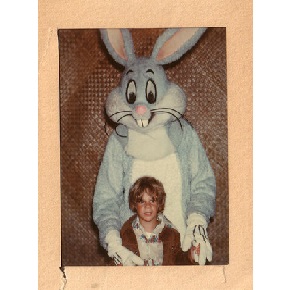 In December 1994 I bought my first home recording apparatus, the Tascam 424 4-track cassette recorder.  I started recording solo sessions and impromptu jams with friends.  Before I had a drum kit at my disposal, I used to make ‘mock drum kits’ with pots and pans, stretched canvas and glass.  I would buy these Junkers at Salvation Army or commandeer old glass bowls from around the house; kind of like a little kids marching band set up.  I would cover the pot and its lid with a towel so the lid would shake and create “decay”, like a snare drum, but muted so it wouldn’t sound too “tinny”.  The towel would also help keep it in place.  I used a stretched canvas, a painting of my sisters, for a bass drum and usually draped it over a pair of sneakers, then prop a microphone underneath it.  I would use a loose bass drum mallet for the canvas and sticks or brushes for the others.  I think buckets, card board boxes and guitar cases were also employed.  Most of these recordings were to familiarize myself with recording, pass the time and exercise my improve skills.  I would rarely rehearse a bit before doing an overdub as I just didn’t have the patience, plus I was so used to just “Going” once the tape was rolling.   Recording solo also gave me the opportunity to experiment with guitar sounds and pedal combinations; Wha Wha all the way UP in the high range and Octave pedal in the low range creating this wall of sound devoid of any discernible tuning; octaves and frequencies would clash and phase off each other at the same time, messy headphone fun. I never distributed these recordings on a cassette releases, only the Joe Bob Briggs theme every made it out of the house.  I just played them for close friends and band mates. Some became favorites around Severed Lips HQ; digging the quirky fuzzy production or my awkward early attempts at singing.  A few tracks were reworked for Dynomite Cat, King Ghidorah and Armageddon Gospel.

Ruby (dynamite cat) and I sing in this fantasy stroll in the wood that leads to the discovery of a dead girl and a naive discussion of mortality. Pots ‘n’ pan dums, maybe a cardboard box too. One of my Wha Wha pedals broke and turned into an overdriven volume pedal which I continued to use for that added boost.

This song was one of the early Dynomite Cat songs and may have been played at a Christmas party with Ruby on bass and vocals and myself, guitar and vocals.

Solo Hellfire experimentation featuring pot's n pans drums. Chorus from a variable Morley chorus/delay pedal used once on the percussion and next on the vocals.  Inspired by a lifelong love affair with THE CRAMPS.

4tk experimentation and creation of the song 'THIEF' later recorded with a full band, KING GHIDORAH! for the 'Primateen Mist Kills Super Models' Compilation (also featured on KG Long Pig compilation). Pots and pans from Salvation Army mixed with a towel covered glass bowl as the “high end” percussion instruments. A stretched canvas laid out over a pair of sneakers with a radio shack microphone underneath it as the bass drum.  Overdubbed with Bass, guitars a little key board and scratchy vocals through some distortion Boss stomp box I can't remember.  Before reworking with king Ghidorah!, I found that I had forgotten the lyrics and was having trouble deciphering the garbled mess, as I had made them up in one take years ago.  Mikey Ovum said that he ‘knew’ the lyrics having listened to the song over and over and deciphering his own version of the song.  What started as a “cradle robber’s” warning became the yelping’s of a GRAVE robber who would steal your bones and even your headstone.

Standing By the Stairs

Pot’s ‘n’ pans noise-rock.  A love letter to Big Black. Witnessing and imaginary murder while smoking a cigarette in the broom closet.

This song was actually written years before and was to be reworked at the very first Disco Missile recording session in 1992 however Eddie and Todd popped a tab of LSD in my mouth before we could even set up sending the session in an alternate direction…thankfully.

One of the first songs I recorded with my new 4-track.  All guitars, big muff and boss chorus plus Gorilla practice amp reverb shaken not stirred.  A tribute to interstellar Astor Projection, Clockwork Orange soundtrack and Devo.

This may be the very first recording done with my 4-tracks.  A cute improved psyche guitar jingle.

Mouth In the Wrong place

Both tracks recorded with Frankie Norton, Mike Brenan, Scott G Beattie and William Hellfire. Room mic’s hanging from the rafters and placed on tables, vocals through an amplifier in the room I believe.  Cowboy Picassos

Will In a Bottle

All three recorded during a snowed in night blizzard of 1995 I think.  Ruby and our friend Max stayed over during a heavy snow fall, leaving us stranded with nothing to do but take pseudo ephedrine, drink coffee and ration our cigarettes.  Buckets for drums, Max on Rhythm guitar.  Cat Nap and Got a Hand were consider NOVELTY songs round the Severed Lips HQ and would usually make everyone laugh tillt hey cried and ask for replays.  Cat Nap was covered by Dynomite at a live show and in rehearsals.

Embarrassing attempt at making an experimental pop song version of yup, the Billie Holliday song, then aborting mission and trying to salvage the ‘strange’ little jingle.  Included here for posterity and to give anyone who listens a laugh.  Clunkers welcome in their purest form.  Wincing at playback.

Seduction of an electric violin on the premises of recording a song.

Added here for posterity and a laugh amongst friends this is a Boom Box recording of an impromptu Jam at the end of a backyard concert in Haskell NJ.  My band Odd (with Chris Wichtermen pre-wryboxfeast and Scott Morley) played what was basically an outdoor rehearsal for a few friends when John Cook took over the guitar and Scott Beattie whipped out a heartfelt Louie Louie. I struggled along on bass.

I decided to re encode from the original 4-track tape being the original 1994 mix down was on a “freebee” type 1 blank tape from Winston Salem Cigarette Company.  This is a higher quality mix, though not quite the same sound as the original hence the use of both mixes on this compilation.  Hard to let go of the purity, the old fuzzy tapes with their warbles and hiccups, garbled bits and pops have a life of their own, the nuance and inherent problems just as important as the songs and their naïve train wreck entanglements.

Got A Hand (Dynomite Cat) by William Hellfire is licensed under a Attribution-NonCommercial-NoDerivatives (aka Music Sharing) 3.0 International License.