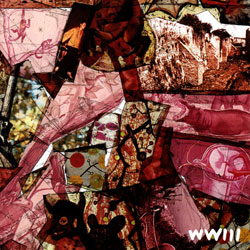 World War 3 was a trio featuring DC underground stalwarts Josh Blair (now of Orthrelm, once of Companion Trio & Supersystem) on drums & electronics, Jerry Lim (once of Companion Trio and Pithot) on guitar, and DMG's own new recruit Chuck Bettis (once of All Scars, Metamatics, Devastation Duo, Measles Mumps Rubella, and numerous Zorn-instigated NYC improv throwdowns) on bass and Fender Rhodes. They were active for just about 2 years, from 1996-98, during which time they played with groups like Ruins, To Live & Shave in LA, Royal Trux, and the Make-Up. During their brief existance, they explored the possibilities of growth, ritual, and exploration outward from the punk roots from which they'd all come up into a darker, hairier, and altogether nastier experimental beast born from a diet of free jazz, improv, and experimental electronic music. While the recordings on this self-titled CD date back to that fertile two-year period, they were not released until nearly 10 years later, and with hindsight comes the delight in hearing the roots of where these guys would end up musically. This record is the sound of a band trying to kick, claw, and bludgeon its way out of the punk box while still trying to hold on to the spirit of their origins - and for teh most part, it's largely successful. Deep, muddy drones, smears of atonal guitar, and rough and tumble clusters of drums and bass all collide and intersect into a real punk-jazz hybrid that would make Jaco crap his pants. Nice work, guys - better late than never. - Mikey IQ Jones.