You came this way: Home > The Scientists > Live at ATP-NY 2010 > When Fate Deals Its Mortal Blow


When Fate Deals Its Mortal Blow by The Scientists 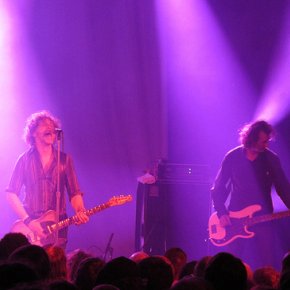 "The reunited band made up for almost 30 years of lost time by putting on a fantastic set of their dark-tinted post-punk. [Front-man Kim] Salmon delivered a raw and violent vocal performance on Friday that showed off the chilling deepness of his voice as frequently as it did his trademark growl. Tearing through the enhanced “Blood Red River” reissue track list, The Scientists’ heavy rhythm/angular guitar attack was in top form; particularly on the track ‘Demolition Derby’ where the rhythm section chugged along behind Salmon, whose voice ranged from fuzzed-out crooning to sleep deprived howls, while the dual guitars’ jagged jangle descended into noisy chaos." -Michael Darpino

When Fate Deals Its Mortal Blow by The Scientists is licensed under a FMA-Limited: Download Only License.