You came this way: Home > The Men > Live on WFMU from Beerlan… > I Saw Her Face


I Saw Her Face by The Men 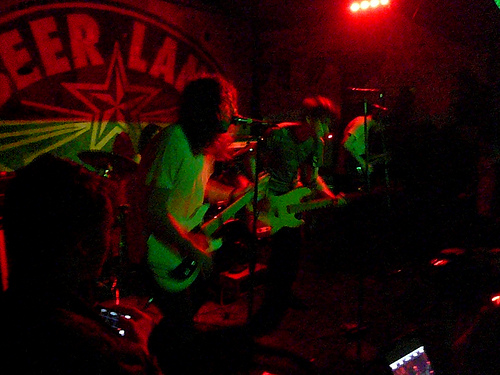 Raucous four-piece post-punk combo out of Brooklyn who've cobbled together a pile of not-so-pounding influences (drone, Krautock, pop) and sets them into car-crash mode. Howling guitars, rocked-up Suicide references, this could be the great crossover Amphetamine Reptile spacerock band if they were around circa 1989. Seriously driving punk rock with intricate, layered structures amidst the raw power. Played live on Brian Turner's show in 2011 (issued as a tour CD), and have a new album out Open Your Heart on Sacred Bones. The gorup now features Ben Greenberg (Hubble / Zs) on bass. Perfect way to tear up the evening's finale at Beerland in Austin TX!

I Saw Her Face by The Men is licensed under a Attribution-Noncommercial-No Derivative Works 3.0 United States License.